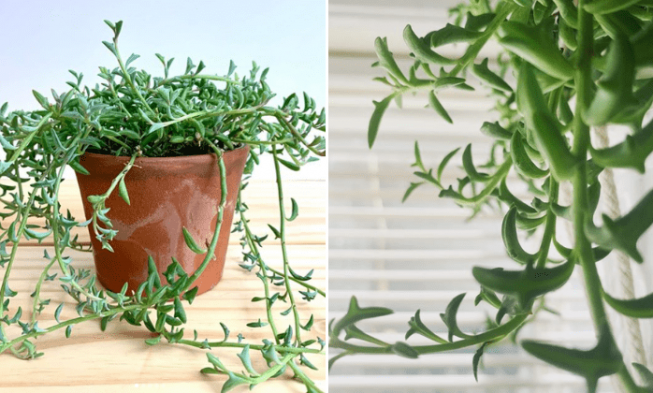 The actual look the dolphins, leaping out of the water in an arc was an inspiration for the name of this plant, whose leaves look just like them.

Taking care of a succulent is the first step towards becoming a plant caretaker because these plants are really low maintenance, thus making it easy to be taken care of. What is more, they make the room look aesthetically pleasing, making it really special.

The dolphin succulent stands out of the various kinds of succulents, since it is the cutest of them all. The world of land, as well as the world of the ocean are gathered in this single house plant. If you are willing to take care of a succulent, then this could be the one for you.

This succulent got its name after the fact that its leaves look like an actual dolphin leaping out of the water in an arc. The actual name for dolphin succulent is Senecio Peregrinus, according to Southern Living. As a matter of fact, it happens to be a hybrid between the string of pearls, known as Senecio Rowleyanus and Senecio Articulatus, referring to the hot dog cactus. The adorable succulent with dolphin-like leaves is the result that comes out of it. It is more than obvious that the dolphin succulent has become an Internet sensation and it would be understandable that you would like to have one too.

A post shared by Good Housekeeping Magazine SA (@goodhousekeepingsa) on May 9, 2018 at 9:45am PDT

Debra Lee Baldwin, who is a garden photojournalist and author of Designing with Succulents told Country Living that the leaves of these hanging succulents have a “sleek, endearing shape, aligned along thin stems which makes them look like leaping dolphins”. She added that since they look like animals, you get the feeling that you are taking care of a pet. If you decide to have it at home, you can either get seeds of the succulent and start from scratch, or get a live plant, or you could just buy it on Etsy.

Just like the other types of succulents, this one is also pretty easy to look after. You may come across some inconveniences while taking care of it because the process could be a little picky, but Baldwin states that the final result will make it up for everything. According to Succulent City, if you are interested in growing dolphin succulent, this is the procedure that should be followed.

If going with the first way, getting dolphin succulent seeds, first thing to do is to germinate them by soaking them in water. It would be better if they are put in warm water first, then cold water, and then you can shift the sprout into the soil of a pot. And then, you can cover the container with plastic, having a few holes in it meant for aeration, or you can use some similar wrapping.

Since the soil should be kept slightly moist, you will have to mist the seeds often. Make sure you get a good soil mix too. And finally you can wait for your seedlings to sprout. Once that happens, you can get them out of the plastic-covered container.

On the other hand, if you go with the other way by getting a cutting of the plant, you can place it in the soil and just wait for it to start rooting. What is great about getting a succulent cutting of this variety is that it starts to root anywhere it touches the soil.

Nevertheless, this plant cannot be grown form the leaves, no matter the fact that it will root. Bear in mind that it will not grow more stems or leaves. But make sure you place it somewhere it gets lots of sunlight.