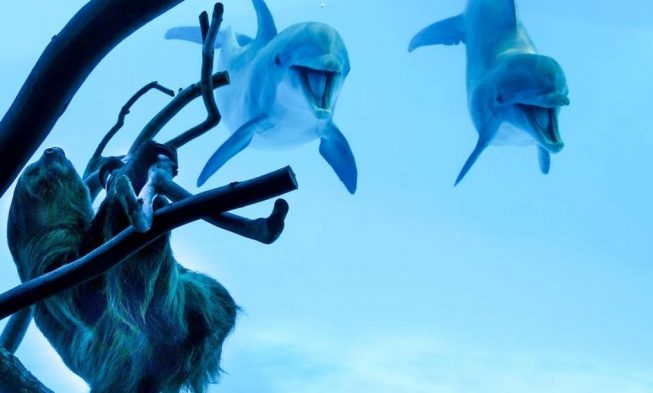 Many aquariums, museums, zoos, and other places for public gathering have closed due to the lockdown from the coronavirus outbreak. This is the same reason why the Texas State Aquarium was closed until the 1st of May.

Even though no tourists or visitors are going to the aquarium, the people that work there are still taking care of the animals. They decided to let the dolphins meet a sloth and the results were incredible.

The aquarium has posted the dolphins on their Facebook page on March 26 how they’re copying the sloth in an upside-down position and are having the time of their life.

The aquarium made a post on Facebook explaining that due to the lockdown, “Chico the sloth had the opportunity for an up-close and personal meeting with some of our dolphins.”

The aquarium took pictures of the dolphins, Liko and Schooner, “and Liko was even inspired to attempt an upside-down sloth impression!”

Four Atlantic bottlenose dolphins reside in The Texas State Aquarium. Besides the two on the pictures, Shadow and Kai are also residents of the aquarium. All of the dolphins were born in a protective environment and they cannot return to the wilderness.

It’s a known fact that dolphins are one of the most intelligent animals on the planet. They are known to have a very playful behavior. They also can learn and apply the knowledge to challenging situations.

Typically, these mammals live in large groups known as pods which can contain more than 1,000 dolphins. Together as a group, they play, hunt, and help each other raise the offspring.

According to Lori Marino, a neuroscientist, the toothed-cetaceans have an encephalization quotient which means that their brain size is relative to their body size (second only to humans). Dolphins are studied to be empathetic species with many situations that they’ve brought a drowning man up from the water so that he can breathe.

“These dolphins are amazing ambassadors to their cousins the wild, helping us raise awareness of the threats faced by marine mammals in the Gulf of Mexico and beyond. In Dolphin Bay, you can learn how fishing line entanglement, pollution, disease, and other harmful human activity endangers dolphins, and what we all can do to help them survive.”

Even though the bottlenose dolphin can be threatened mainly from human activities, they are of least concern around the planet, according to the International Union for Conservation of Nature. There’s an estimation that around 750,000 individual Tursiops Truncates exist in tropical and temperate waters on and offshore, which can be found in equatorial waters across Earth.