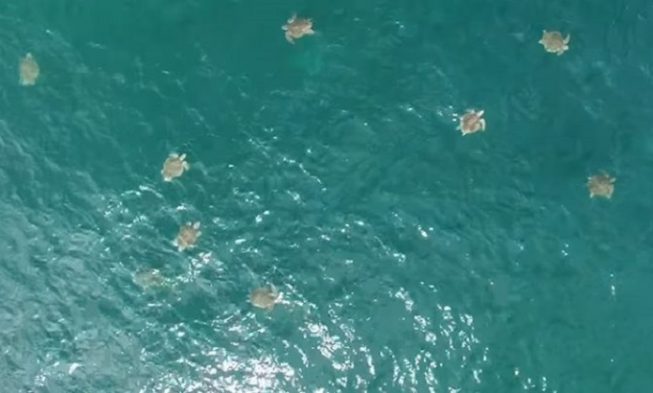 Photographers around the world dream about taking the perfect and unique photos that no one was taken before. Nature is constantly changing so it’s really hard for photographers that capture wildlife scenarios to cease the perfect moment which will leave everyone with an open mouth. However, one photographer managed to do exactly that by using a drone.

Vanessa Bézy, a biologist, was able to take a video of the largest swarm of sea turtles in November 2016. She took the video while flying her drone over a coastline in Costa Rica.

She used the drone to study and investigate Olive Ridley sea turtles and monitor their reproduction.

On the video, you can see thousands of sea turtles swimming through the region just off of Ostional National Wildlife Refuge.

For every square meter of water, there is a turtle. As the drone ascends, you can see new turtles rising from under the surface.

Bézy knew right away that “there was something special going on. To this day I’m still blown away by the video. They look like bumper cars out there.”

Established in 1983, Ostional is an area that’s protected for the turtles. These turtles are listed as vulnerable species and such a huge swarm might be seen for the last time.

The scientific director of the Sea Turtle Conservancy in Florida, Roldán Valverde, claimed that it was the first time he’d seen a video that captured such an amazing moment in the water. He added that a big part of the documented photography happens “on the beach.”

Bézy made it her goal to spread awareness about the need to protect these species. She hopes that with her footage, she will reach lots of people in the world. Globally, these turtles have very few nesting sites even though they’re spread widely.

The main worry for Bézy is that tourism, especially around the beaches where they nest, will lead to their extinction. There has been regulation proposed that will protect the area, however, they seem to not be enough.

Additionally, the Olive Ridley sea turtles have low survival rates going from hatchlings to adulthood. With an additional threat to their population, they might just become extinct sooner rather than later.

With her research, Bézy hopes that she will find the reason why such a big number of turtles gather there. This gathering is in such great numbers, especially in August and October. There are some factors that we can say might be the cause such as beach orientation, sand type, and sea currents, however, none of them have been proven as of yet.

To find the exact reason for their gathering can help us maximize the chances for the species’ survival.

The International Union for Conservation of Nature listed the Olive Ridley sea turtles and six other sea turtle species as threatened.