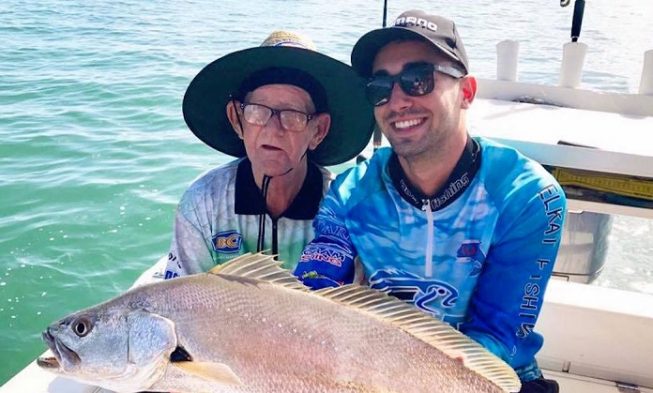 Life is not easy when you get old. In fact, many older adults face so much pain and loss as they outlive their loved ones, one by one. Then there are the many health ailments that accompany old age. One widower already faced his share of troubles after losing his wife and fishing partner, but he refused to give in to the gloom and loneliness. Instead, he turned to the internet to find a new fishing partner.

Ray Johnstone, 75, enjoy the fresh air and quiet camaraderie that comes with fishing, but he didn’t know where to meet someone to accompany him. So in 2017, he posted an ad for a fishing partner on Gumtree, an Australian website similar to Craiglist.

“My name is Ray Johnstone. I’m a widowed pensioner who is looking for a fishing mate. My previous fishing mate is now deceased. What I want is a fishing mate in a similar position to myself, who also wants someone to go fishing with. I am willing to share all costs, e.g., petrol, bait, and should you happen to own a boat [I am] willing to pay all ramp fees, but happy if you are also a land-based fisherman.

“If interested,” he concluded, “contact me either at my email address or phone to arrange a meeting to see if we could get along with each other.”

His post also contained a sad-looking selfie, jokingly describing himself as “used.” The post won the hearts of all who read it, even gaining media attention. It went viral with Johnstone receiving offers to fish with people all over the country.

Read one comment, “I know nothing about fishing, but #IllFishWithRay.”

“I hate fishing, but I would go every weekend and pack sandwiches and tea if I lived in Adelaide. Let’s be friends. #illfishwithray,” said another.

“I just like getting out in the fresh air and keeping myself active,” Johnstone says in an interview. “I don’t want to end up as a vegetable like some old people do.”

The hashtag “IllFishWithRay” went viral as people expressed support for Johnstone. Over 100 people in the country offered to be his fishing partner. Additionally, a Facebook group, “All Things Fishing Sydney,” started a GoFundMe to bring Ray to Sydney and pay for “any costs associated to get him fishing.” By February 9, 2017, the GoFundMe page earned almost $2,000, doubling its goal.

One of the people who responded was 22-year-old Mati Batsinilas from West End. “When I read it, I thought it was a heartbreaking story, so I commented on it, but I never thought it would ever get to Ray,” he said. “When I woke in the morning after posting the comment, it had 1,600 likes and more than 500 messages in my mailbox on Facebook. Everyone was trying to get Ray and I hooked up together to do this trip.”

Despite the odds, Mati became Ray’s fishing partner, along with Mati’s brother Peter. Batsinilas reached out to Johnstone and offered to take him fishing at Stradbroke Island, along with Johnstone’s grandson. “I offered him a holiday away — and not just for fishing, but to get away and relax. I said from the beginning to Ray that we would get there and that I would commit to it and do it.”

Also, BCF, the outdoor sporting equipment shop, sponsored Jay and gave him hundreds of dollars worth of fishing gear.

“He has been so lonely”

Meanwhile, Johnstone’s daughter, Pamela Joy Edwards, showed her appreciation to everyone for their encouraging messages. In an emotional Facebook post, she said that he has “been so lonely since mum passed away.”

People know how lonely and sad older adults could be. And even though not everyone could become Ray’s fishing partner, their comments did provide some semblance of companionship, albeit virtually. He received many calls after the post, from Gumtree from potential fishing mates and from news sites.

“I can’t see how one simple little ad caused that many people to respond,” Johnstone said. “Maybe it’s because I’m 75 years old.”