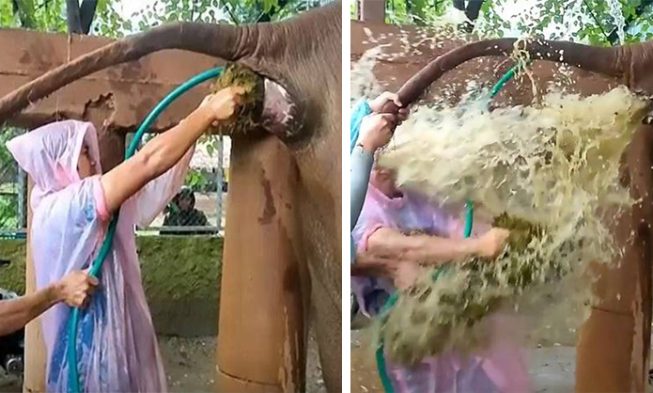 We’ve all had incredibly bad days at work and that’s a fact, it’s just bound to happen. But something tells me none of us have had a day as bad as this Thai vet’s who, when treating the constipated elephant, got a poo shower while staring at the animal’s behind.

With a significant case of blockage, the incredibly big animal was suffering, and this can turn out to be fatal if left untreated.

Dr. Tom and two of his helpers had to go to the Nature Park in Chiang Mai, Thailand on call because there was no one else who could’ve treated the poor animal.

So the veterinarian Dr. Tom came to help out the poor animal. However, the floodgates opened after he managed to scrape a large portion of the poo that got stuck in the animal’s anus and was causing the block. He ended up struck in the face by a yellowish poo.

During the exercise, the team was wearing waterproof ponchos, but at the point when the dung finally came out, they were of little to no use at all – since the poo was accompanied by a stream of brownish water.

As per the report of Jam Press, this particularly unique video has received over 45,000 views on Instagram.

Although the messy sight disgusted some, many other people actually thanked the doctor for saving the elephant.

But the most important thing is that Dr. Tom successfully relieved poor Lana, despite the horrible sight. The Samui Elephant Sanctuary that partnered up with the Nature Park said that Lana had suffered from extreme constipation but was feeling much better after her treatment.