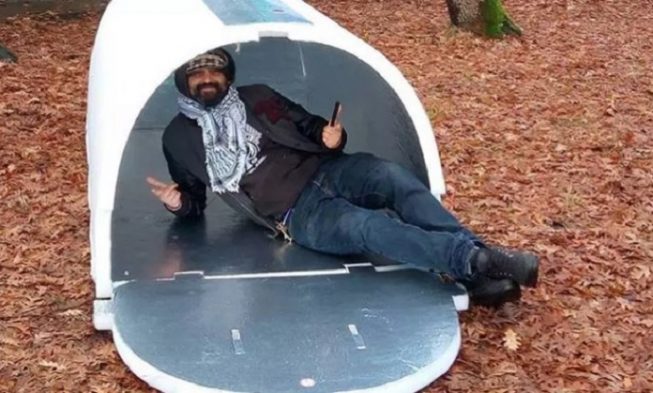 During winter, most of us enjoy staying in our warm and loving homes. However, rarely do we ever think about the people who live outside without a shelter or a blanket in the cold weather during the nights.

Even though most people sympathize with homeless people, not all of them do something to help them. In France, there are more than 3,000 homeless people. This is frightening considering the low temperatures of this winter.

Geoffroy de Reynal, a French engineer who has an MSc in Energy Engineering, had a great idea that could help homeless people. He designed a pop-up igloo which can be raised easily and could fit a person comfortably.

Before he got this innovative idea, Geoffroy was working as a quality manager on wind construction sites. The terrible conditions in France he experienced while working there inspired him to create a shelter that will help the homeless. He used his technical knowledge to solve this social issue.

Nine Igloos were distributed in squats and tested around Bordeaux, France. The homeless people that tried the igloos didn’t want to leave them. The shelters not only protected the homeless from violence and theft but also protected them from the weather at nights.

The igloos inside are around 15° warmer than outside because they’re made from polyethylene foam. The foam is also covered with aluminum foil. Both these layers protect the igloo from the temperatures outside.

The igloos are compact, private, recyclable, repairable, and waterproof. Additionally, solar lighting and body heat are being absorbed to raise the temperature on the inside.

Using his own money, Geoffroy built the first of the igloos this winter. Afterward, he created a crowdfunding campaign and received around $20,000. With the crowdfunding money and some additional money from himself, he created 20 prototype igloos and distributed half in Bordeaux and half in Paris.

For a year, Geoffroy lived in Montenegro. In Montenegro, not a lot of people are homeless, and he noticed that once he returned to France. He was completely surprised by the number of homeless, thus deciding to help them any way he can. The goal he had in mind is to make their life less difficult.

Geoffroy wants to make the igloos bigger with a place that the homeless could shower. By 2020, he wants to create thousands of igloos.