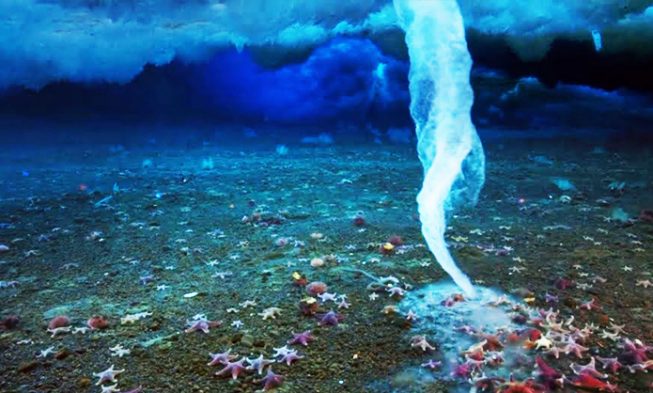 Even though there might be many people who don’t believe that “icicles” can be found underwater, there they are. They might look a bit differently than you had imagined, but they are definitely mind-blowing for many reasons.

These sea “icicles” or else known as “fingers of death”, can be often found underwater and they are quite frightening in many ways. This unusual phenomenon was caught on footage by the cameramen Hugh Miller and Doug Anderson. They shared this filmed moment with the BBC One series Frozen Planet.

You can find them under the name of “brinicles” as well, and the way they are formed is really intriguing. You may think that they are just frozen bits that randomly fell into the water, but they are way more than that. They are finger-like structures that reach down from the floating sea ice into freezing Antarctic waters.

Scientists have known about their existence since 1960s, but they rarely observed them in real-time. They form in special conditions in Earth’s polar areas, under blocks of floating sea ice. Therefore, it makes them difficult to be found for whatever purposes. That’s why the footage the two cameramen caught is so special. They achieved to film the entire phenomenon on camera for the first time.

How is the binicle formed?

Bruno Escribano, who is a researcher at the Basque Center for Applied Mathematics in the Basque Country, explained the forming process. He says that when sea water in the Arctic and Antarctic freezes, the salt, together with all the ions in the water are excluded from the water crystals. The brine that is filled with salt, accumulates in fractures and sections within the sea ice.

However, it’s inevitable for the sea ice to crack. And when that happens, the brine leaks out. Since salt-rich water freezes at lower temperatures, it is more than clear why the brine itself is colder than the freezing point of sea water. This occasion reveals the point of putting salt on icy sidewalks in the winter, thus enabling the ice to remain a liquid when it’s below freezing.

Now, since the concentration of water in the brine is lower than that in the ocean, water is attracted to the brine. But since the brine is so cold, the water in it freezes, thus forming a descending tube of ice.

Referring to people, brinicles are not dangerous. We mentioned that they are formed beneath the sea sheets, and a man seldom dives so deep into the water. However, those who do, take precautions to avoid getting injured in any way.

But the brinicles may be really dangerous for nearby sea creatures. Since a brinicle can reach a seafloor, it grows from that point. While growing, it can catch and freeze some creatures that do not move fast enough to escape it.