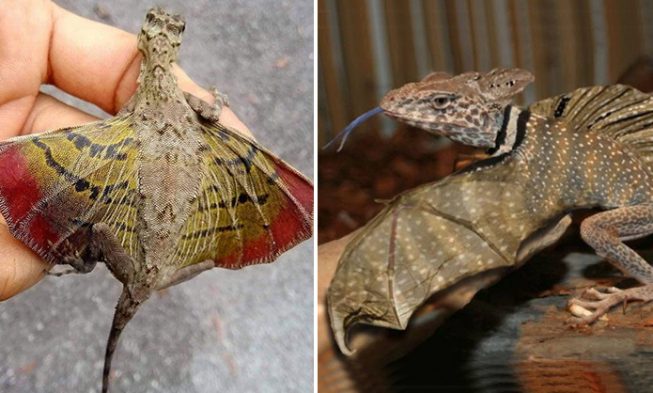 Dragons are the animals which have come from a world of magic.

Dragons are mythical creatures that have amazed people for years and years. Legends about these creatures are fascinating and people never get tired of listening to any of them. Unfortunately, the dragons we have in our minds do not exist. However, there is one group of animals that are really close to dragons. And it proves one more time that wonders of nature do exist.

“Flying dragons” belong to the genus Draco. It’s part of the Agamidae family of lizards. They live in the trees of the South Asian tropical forests.

Living on the forest floor, filled with predators, lizards have started the adaptations for fight. The Draco lizard, or else known as “flying dragons”, have a set of elongated ribs. And they can extend and retract them. Between these ribs, there are layers of skin that rest flat against the body when not in use. But it acts as wings when unfurled. Thus it makes it possible for the lizard to catch the wind and glide. To steer themselves, the lizards use their long, slender tails. They can fly up to 30 feet.

Dracos are about 8 inches long, including tail. Their bodies are flat, which also aid in flight. The color of their bodies is mottled brown. The undersides of their wings are blue in males, whereas they are yellow in females. The flap of skin on the bottom of their necks is bright yellow in males and bluish gray in females. It is called dewlap.

Males defend their territories and use their abilities to chase rivals from the trees they claim as their own. They usually defend two or three trees.

Even though going to the ground is not typical for Dracos, females have to descend to deposit eggs. The female lizard uses her pointed snout to dig a hole in the ground, where she usually lays five eggs. Then she uses dirt to covert the hole. She’s guarding the nest for about a day, and then leaves the ground and returns to the trees. Thus the eggs are left to their fate.

Flying dragons usually eat ants and termites. These lizards live in densely wooded areas across Southeast Asia and into Southern India. They have no special conservation status.