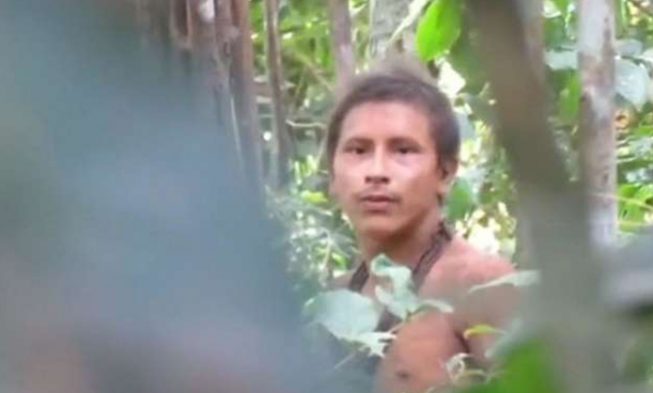 New video of the isolated Awá tribe in the Amazon rainforest has been released by an indigenous film group from Brazil.

The one-minute video appears to show a man carrying what looks like a machete, who seems to be staring directly at the camera at one point.
Then another figure, holding what could be a bow and arrows, can be seen momentarily before the pair runs off through the dense forest.

The brief video, showing people who seem to be from the Awá tribe, was filmed by a member of the people of Guajajara, a neighboring tribe trying to defend the last fortresses of the forest where the Awá live.

When they saw the Awá members and filmed them, the Guajajara people were hunting near their village. They filmed this in hopes that the evidence of the existing presence of their tribe would assist the Guajajara community. They are well known to be the Guardians to protect the land. In order for them to be able to track criminal activity, the Guardians constantly patrol the forest, putting their lives on the line to do so.

Members of the tribe said that they didn’t have permission to film the Awá tribe, but they knew that it was necessary to use these footages because if they didn’t, loggers might kill the Awá.

Although part of the Awá tribe – or rather some individuals – are in touch with society, there are some who remain isolated in areas deep in the forest, but their existence is threatened by the invasion of not only illegal, but government-endorsed activities.

Survival International deems the Awá tribe the most endangered tribe in the world, and their territory is decreasing rapidly. Many environmental regulations have been loosened under Brazilian President Jair Bolsonaro and he has no intention of improving his legislation to assist these tribes.

The Amazon rainforest is suffering and it is one of the world’s largest carbon sinks helping to mitigate global greenhouse gas emissions. The rainforest is disappearing at a rate of a soccer field a minute.

This video is further proof of the presence of the isolated Awá. And a fast look at satellite images suggests the extent of the danger in which they are.