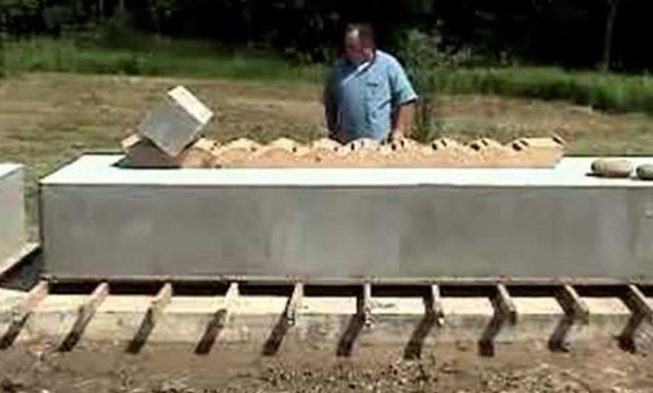 Stonehenge and the Egyptian pyramids were built like thousands of years ago, when there was no technology whatsoever that would help the people at the construction site.

Therefore, the way people back then did it, remains a mystery. There are some theories, some of which claim that people used slides so as to move the stones and rocks, some others believe that the use of oxen was crucial in building them, and so on.

However, there’s this carpenter from Michigan who seem to have discovered a trick to lift a 20-ton block by hand. Therefore, he may have solved the mystery that’s been bothering people for many years.

The story is about Wally Wallington, who as mentioned above used to be a carpenter. Now he’s retired but all the physical work he’s done over the years has taught him many techniques that would help him move heavy things.

He’s been working in that field for 35 years and he learnt so much about lifting heavy materials. And that’s how he earned the name he’s famous for now: The man who is able to lift 20-tons with his only hands and no help whatsoever.

How did he come to the solution?

Being a carpenter for his whole life, he found himself in many situations when the only thing that mattered was to get the job done. Thus, it made him improvise many tools and methods just so to do it right.

One such thing happened like 20 years ago, when he had to lift 1200 pounds of concrete blocks. So he and his team didn’t really have anything that would ease the job, so the only reasonable thing to do was to break them into smaller chunks and load them into wheelbarrows. But he realized that it would take them much time and it’s more like a labor-intensive job.

So this guy came up with an alternative solution. Wally considered using rocks and leverage to move the blocks from one place to another. He says that it’s all about physics. He points out that the mess resists movement and if you set it on motion, it resists change.

And if the weight is balanced, rotation can be initiated and the object gets stable. Therefore, the more weight, the more inertia. And the more inertia, the more stability. Which means the heavier the object is, the easier it is to balance it. So he mastered the technique and finally he was able to lift 1200 pounds of concrete blocks by hand.