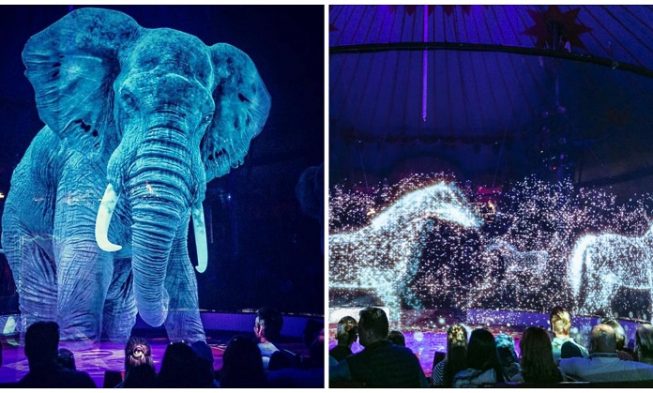 Circus Roncalli has been entertaining crowds since 1976 and right now they made an unimaginable show, replacing horses, lions, and elephants with holograms of each. The show remains spectacular.

Circus Roncalli made changes to aid the continuous battle for animal cruelty in the big industry.

The circus show still has tails, tusks, and many acrobats with fiery circles. However, as a world’s first, they did not contain a single live animal. The circus featured amazing 3D holographic images with projectors which filled an arena of 32 meters wide and 5 meters deep. The view was 360° and enjoyable by the audience.

Roncalli’s agency, TAG/TRAUM, joined together with Bluebox which is partnered with Optoma that have installed 11 ZU850 laser projectors through the arena. This provided the circus with equipment to make a mesmerizing experience. This concept and idea came from the founder and director of Roncalli, Bernhard Paul.

“We have been using Optoma projectors for 6 years and have consistently had a very positive experience in price, performance, and reliability. We needed a high contrast projector with great colors for the 3D effect and the ZU850’s 2,000,000:1 contrast is perfect for this project,” said Birger Winderlich at Bluebox.

This concept came in the perfect time where the conditions of animal living in captivity are of the utmost concern.

Bernhard Paul made an interview where they asked him about the concept and idea for the show. He wasn’t sure what the audiences’ reaction would be like, however, many people from around the world emailed him and wrote him letters. 95% of the entire feedback that he got was positive.

In one year, his show “Storyteller” had more than 600,000 visitors. Even though Paul was scared of the changes he was making, he trusted his gut and made the necessary changes which will lead to a better life for the domesticated and captivated animals.

Paul stated that the show will get better throughout the years as they experiment with the holograms. Additionally, they are the first circus that became plastic-free. Popcorn in the circus is only sold in paper bags. Vegan and vegetarian food is also served at the show.

Even though sometimes there might be some technical problems, Paul has a bright feeling of what is to come from his show.

Many activists accuse the circuses of treating the animals with cruelty, beatings, starvation, and keeping them in unsanitary conditions. The animals are being forced to perform for huge crowds every night on tight schedules.

The UK government made a great example of the cruelty-free movement, banning all traveling circuses from using wild animals from 2020.