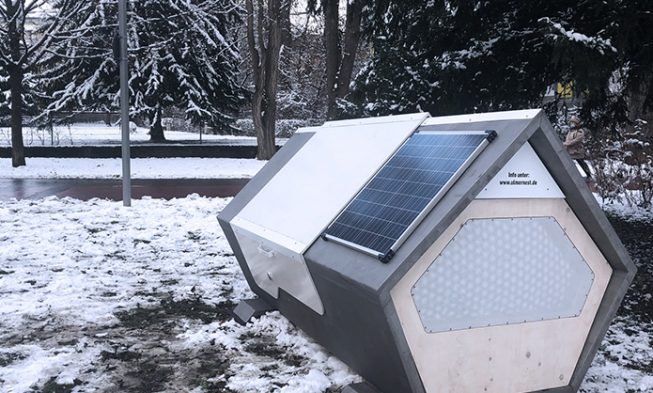 There are homeless people everywhere. Living on the streets is difficult enough, and going through it during the winter season can be extremely tough.

That is what motivated a German team to do something so as to help those people. They came up with an idea to build sleeping pods thus providing the homeless with an emergency shelter at night. The pods were installed across the German city of Ulm.

The team consisted of six business people from the city. All of them were experts in designing and developing products. And it was back in 2018 when they first came up with the idea, but their amazing creations were tasted just last winter.

Ulm Nest is how the makers refer to this project. It provides homeless people who have no other choices but to survive on the streets, with an emergency instrument in the last instance. The team behind the idea believe that it is a much better alternative for the homeless to spend a night in those pads, rather than staying completely unprotected outdoors.

The local officials and the designers themselves point out that the sleeping pads they have created are not an alternative to an overnight homeless shelter or some similar well-controlled environment.

According to them, it’s an alternative to an overnight stay in the open air. The sleeping bags can minimize the weather conditions the homeless are faced with, like the wind, wet and cold. People must know that the severe low temperatures can still be felt once inside the Ulm nest. And that is way it was primarily noted that these pods are the last option the homeless should consider.

The material they used to create the sleeping pods

The designers chose the material very carefully, trying to consider different aspects. They decided to use a combination of solid wood material for the base body.

Whereas for the cleaning-intensive and hygienically critical parts they used powder-coated steel sheet. After creating the individual segments, the wood is perfectly sealed with a glaze, thus it is windproof and waterproof. The creators have added solar panels in the capsules as well.

On top of that, they are connected to a radio network, thus making it possible for the people staying in them to communicate without having to use a mobile phone. The makers have improved the closing and locking mechanism too. These sleeping capsules can accommodate up to two people and there’s room for these people’s belongings too!

Homeless people intending to use them, do not need to fill any paperwork so as to check-in. And the nest comes with a motion sensor and sends a signal to a team of social workers anytime someone opens and closes the access hatch.