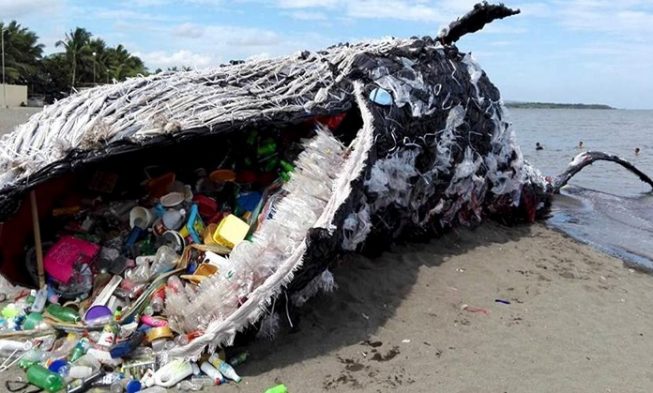 In the last 50 years, the global production and consumption of plastics have continued to rise. The modern way of living, working, vacationing has influenced the pollution of the environment with the plastic waste.

As the plastic materials are durable and very slow to degrade they become waste with staying power.

To address one of the world’s most serious problems, plastic pollution Greenpeace Philippines recently created an art piece a giant “Dead Whale.” The idea is to motivate the public to consider the impact of this plastic trash and to illustrate why people need to recycle. Additionally, it should motivate the use of alternative biodegradable containers, such as hemp or glass whenever is possible, as well as to participate in local clean-up projects.

The giant “Dead Whale” installation is the 50-foot long whale replica, which is entirely created from plastic waste, and ‘beached’ near the shoreline in Manila Bay.

Greenpeace Philippines wrote the message on Facebook that people should look closer and see what plastic pollution does to the ocean. They also express a strong belief that this installation will encourage the public to take action and decide to avoid (refuse) plastics.

According to creative director of the “Dead Whale” project, Biboy Royong, this art exhibition was inspired by a young 38’ long sperm whale that had died after ingesting fishnet, plastic, hook, rope and steel wire. This art exhibition is a copy based on its shape, color, texture, size, and proportion. They played more with the textures on its skin using plastic trash collected from this area, with the intention to surprise the community in this area.

Royong told Spot that the environmental projection by 2050 if the polluting doesn’t stop, could be more ocean wastes than marine life.

The impression of the many people who first time saw the whale, was astonished, and they quickly shared photos causing the story to go viral. The Greenpeace, actually did little to no advertising of the project, which seems is not necessary because the people who saw it made it really attractive, by spreading their views on social media.

Watch these videos for more information

For example, one person wrote on the Greenpeace Phillippines’ Facebook page that this was the most disturbing thing that he has ever seen in his life!

One of the activity how Greenpeace wanted to achieve the effects of this project is by circulating an online petition, calling on the ASEAN member states to take concrete measures against plastics pollution

How the plastic pollution is dangerous and what are the effects on the ocean life, you can see in the video below: