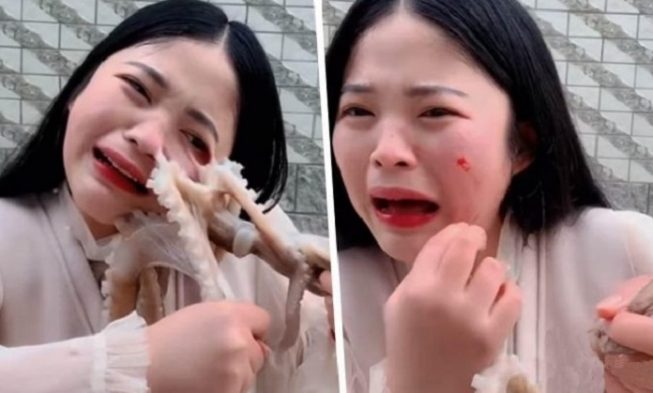 However, this way of dieting can be sometimes dangerous, such in a case with one woman who was attacked by an octopus when she tried to eat it alive.

This situation was recorded and shared by a popular Chinese live streamer and blogger known as ‘seaside girl Little Seven’ as a 50-second-long video on the popular short-video platform Kuaishou. The video very quickly became viral.

In the video can be seen the woman grimacing in pain, who is desperately attempting to remove the animal’s eight tentacles from her skin. The MailOnline explains how the mature giant Pacific octopus uses its 280 suckers on each arm to defend itself from potential attacks.

The octopus tried to fend off the woman, attaching its suckers tightly to her face. The blogger at the beginning remains calm but later starts to cry as she realizes it won’t let go.

Iuch! That will teach her a lesson not to play with Octopus. Poor baby must have been terrified and eaten alive. ☹ https://t.co/rkAwBeXbOk

Octopus 1, Vlogger 0 – People like this are why we have warnings on EVERYTHING 🤦🏻‍♀️ #idiot #nosympathy https://t.co/LCm76LzbOE

My goodness! Why would you risk eating something that can suck your face off first? https://t.co/eMbhaZtdUp

You can watch the footage here:

In the video is shown how much strength is needed to remove octopus and how painful is that procedure.

The video tells us, also that the octopus can disfigure the face, why the girl is even crying.

This video is one of the serials of videos shared by that blogger, who is famous for her love of eating seafood. She was clearly keen to achieve fame and in the video, she complained why none of her clips didn’t end up on the trending topics.

In another case, a kayaker Taiyo Masuda got slapped in the face with an octopus by a seal and he shared footage of the incredible moment on Instagram.

The fight with the octopus attached itself to the kayak lasted a long time, and the kayaker could only get it off with the help of the others around him.