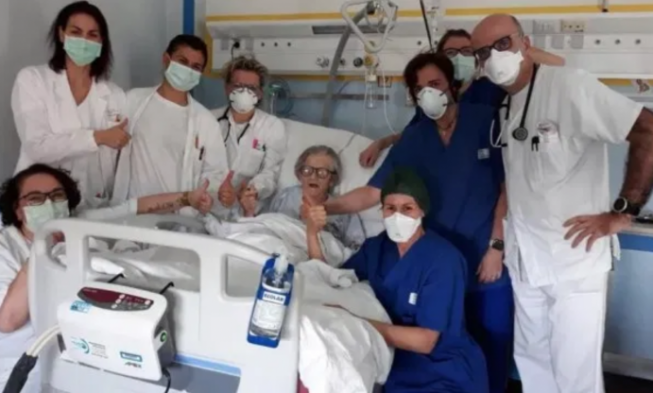 Hope is the last thing that dies in a person, no matter how difficult the circumstances in which people are.

Currently, when everyone is dealing with the problems caused by the new virus and when experts say it is the hardest thing for the elderly, we have an example where a 95-year-old Italian grandmother managed to beat it and became the oldest known woman in the country to recover from coronavirus.

After suffering from symptoms of a deadly disease, Alma Clara Corsini was admitted to Pavulo Hospital in the northern province of Modena on March 5.

By Sunday, the number of coronavirus patients in Italy had risen to nearly 60,000, including Corsini. There is a special concentration of patients in the north of the country, and doctors, specialists and all well-meaning people work hard to help deal with this devil.

This effort by the doctors and others involved has also succeeded in Corsina, although everyone claims that it is almost impossible to help the elderly. Thus, she has now become the first elderly person in Modena to recover from a new virus.

She, earlier in the week confirmed:

“Yes, yes, I’m fine … They were good people who looked after me well.”

A Gazzetta Di Modena post stated that she was able to make a healthy recovery without any need for “antiviral therapy”, adding that her body showed a “great reaction” despite the infection.

Even Pope Francis appeared on Corsini’s fortune, posting on Facebook a picture of her and members of the medical team who helped her in that glorious battle with the corona. saved her.

“In Italy, a 95-year-old granny is the first patient to be cured of coronavirus. Alma Clara Corsini has won this battle for her life to give us hope.”

Corsini was discharged from the hospital and is now at her home in Fanan.

Since the crisis in Italy, about 5,480 have died and 7,030 have been recovered, while the spread has not stopped.

Italy continues to stand firm at the epicenter of the global crisis, exceeding the death toll in China last week, despite its small population, so all domestic movements remain banned and irrelevant businesses closed.

At Pavullo Hospital, Corsini has become the pride of staff who have been able to save her from the deadly virus, making great success in refuting the theory that older people are almost unable to survive.

The treatment of the 95-year-old was attended by doctors Cinzia Cappi (infectious disease specialist), Alessandra Marrazzo (internist) and Maria Cristina Fontana (responsible for semi-intensive diseases) who had a direct relationship with Dr. Giorgio Cioni, head of internal medicine.