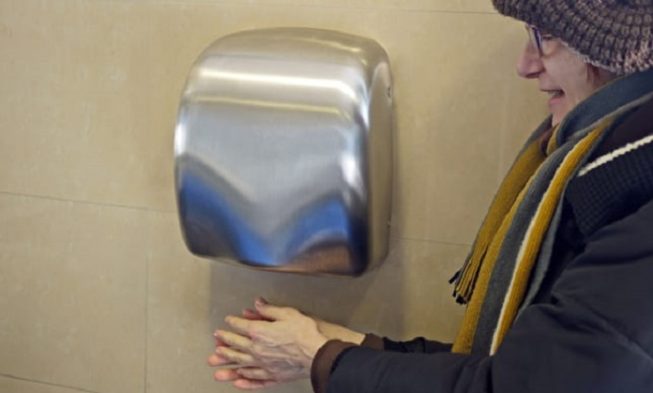 All people are aware that the fecal bacteria shoots into the air when a lidless toilet flushes, which is called a “toilet plume.” But, the question is, where do all that fecal bacteria go in the bathrooms where such plumes run regularly?

Perhaps they go into a hand dryer, but they can also go onto your clean hands, which is suggested in a recent study. During this study, researchers examined plates exposed to just 30 seconds of a hand dryer compared to those left out.

According to the findings published recently in the journal Applied and Environmental Microbiology, the air-blasted plates carried 18-60 colonies of bacteria on average, while only two minutes’ exposure to the mere bathroom air left less than one colony on average. Additionally, the inside of the dryer nozzles the bacterial levels were minimal.

Also, Newsweek reported about the study, in which a Connecticut-based team looked at 36 bathrooms at the facility of the University of Connecticut School of Medicine. In one lab they found large amounts of spores of PS533, a specific but harmless strain of bacteria Bacillus subtilis. The percentage of colonies of that strain was about 2-5%. Bacterias were found on the air-blasted plates, regardless of how far the specific bathroom was from the lab in which the spores were created.

The authors of the study said:

In the study, they couldn’t define why the air-blasted plates showed so many more spores. they believe that the dryers could act as “reservoir” for bacteria, or perhaps their intense blowing simply provides more exposure to the already contaminated air. They also said that the dryers can cover hands in bacteria, but it’s not certain whether they deposit bacterial spores.

Newsweek reported, also that the study author Peter Setlow prefers paper towels, which were stocked at all 36 bathrooms used in the study. He explained to Newsweek:

“Bacteria in bathrooms will come from feces, which can be aerosolized a bit when toilets, especially lidless toilets, are flushed.”