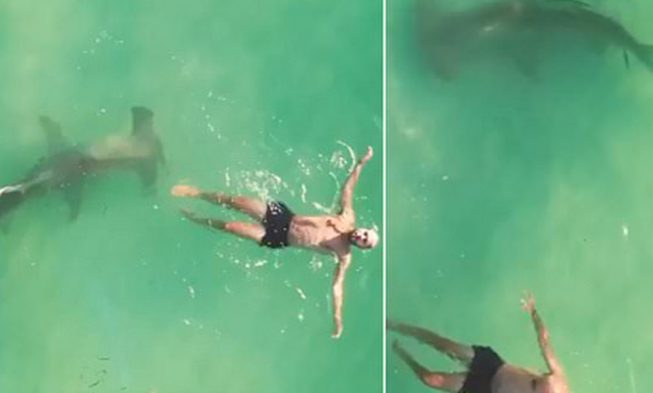 Yet another, amazing and quite unusual moment ended up being captured on a drone footage. It features a 10ft shark swimming beneath an unsuspecting man.

The incident happened in Miami, Florida. Miami attracts lots of people throughout the year because of its blue waters. There’s no doubt that it’s an exciting experience, however, one man underwent an electrifying experience while enjoying himself in the clear blue waters.

In the clip, it appears as if the man is totally unaware that an enormous hammerhead lurks just underneath the surface.

On November 15, a local Jason McIntosh who is 41 years old, was flying his drone over the waters. He’s passionate about shooting wildlife in the ocean.

Therefore, his idea was to check out the south beach for taking pictures. So he was 25 meters away from the area when his drone captured the unexpected scene. He noticed that a random man was floating with a huge shark just below.

McIntosh said that he was unable to alert the man in any way. He is used to seeing sharks in the shoreline, but what terrified him was the guy who was swimming in the waters with the shark starting to circle him.

Then, he continues by explaining that the man was floating and paddling on his back. He seemed quite as ease. At one moment, he even put his thumb up to the camera.

It was pretty clear that he didn’t know about the danger he was exposed to. Anyways, McIntosh pointed out that people must never forget that the ocean belongs to sharks. So we are the ones who should be careful when find ourselves in their environment. And yet, this shark decided not to disturb the man.

Many people were able to see this video on his Instagram profile (@jasonmac7). It provoked hundreds of comments. There have been over 25 000 people who viewed the video so far.

Among those people was Mick Fanning whose exact words were: “Holy s***, wow!”. This man is a surfing champion who has survived a shark attack.