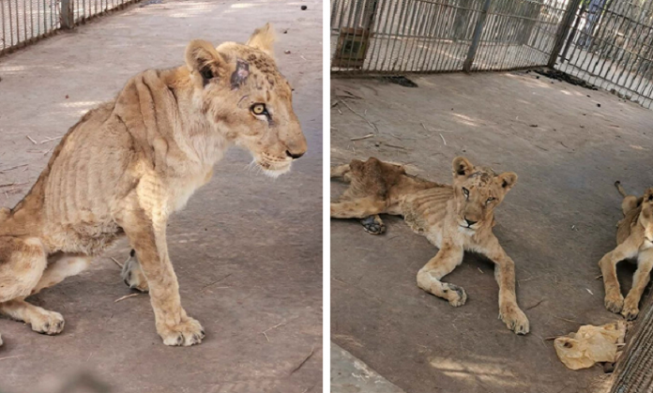 Numerous animal rescue campaigns can be seen on the Internet today. One of the campaigns that deserve special attention is the “malnourished and sick” African lions who reside at the Sudan Zoo. People responding to this campaign are calling for big cats to move to healthier habitats.

Sharing this campaign, images from Al-Qureshi Park in the capital of Khartoum were posted, showing five lions with skin hanging from their bones, a result of the zoo’s inability to provide food and medicine for them.

This campaign was launched by Osman Salih online under the hashtag #Sudananimalrescue. Because it has attracted a lot of attention, it is believed that it will respond through social networks to the problems that lions face.

Visitors to the zoo are appalled by the situation they have encountered, and some have shared these distressing moments and urge interested people and institutions to help them to live normaly.

Salih continues to post numerous updates on Facebook about the condition of animals and has posted a tragic status about the death of one of them. In one post he wrote:

“I regret to inform you that the sick female lion has died. The other female is getting better and the male is OK.”

The worldwide media has shown tremendous attention, along with doctors and civil societies who have responded positively to calls for donations of food supplies and appropriate medical care.

Although Al-Qureshi park officials are aware of the deterioration in the overall situation of lions, which have apparently lost up to two-thirds of their body weight, they cannot respond because they face a lack of nutrition resources. The Khartoum municipality is the park manager, but in part, it relies on private donors.

According to Park manager Essamelddine Hajjar, food is not always available so they need to buy it from their own money to feed them.

Park caretaker Moataz Mahmoud added that the animals are suffering from severe illnesses, which influence their appearance so they look like to be starving.

Sudan is in the midst of a severe economic crisis and is currently one of the poorest countries in the world. In Sudan, the price of food and basic foodstuffs has increased sharply due to the decline of the Sudanese currency.

Salih points out that emergency responders in the area are monitoring and offering medical assistance to malnourished lions, but international calls to rescue lions are increasingly present, insisting on finding new homes for lions.

He wrote for Sunday:

“Today was a positive day at Qurashi Park. We had good meetings with the park administration and the wildlife police.

Lots of fresh meat was brought by several donors as well as two sheep. Supply of regular meat from factories and slaughterhouses was also secured.”

For him, the best news of the day was the readiness of FOUR PAWS International to send an emergency rescue, which would rehabilitate the animals at Qurashi Zoo and other parks in Sudan. This team would also train wildlife authority.

Today was a positive day at Qurashi Park. We had good meetings with the park administration and the wildlife police. It…

According to the International Union for Conservation of Nature (IUCN), African lions are classified as a “vulnerable” species, because records show that the species population has dropped 43 percent from 1993 to 2014. It is estimated that about 20,000 of them remain today these kinds of lions.