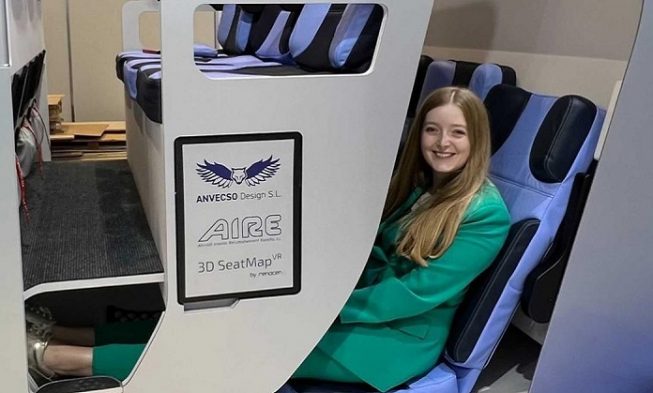 When it comes to air travel, most of us do it in economy class simply because it would be unaffordable otherwise. However, this designer is taking it another step further and believes that their double decker airplane seat will revolutionize air travel. The Chaise Longue Airplane Seat concept is the brainchild of Alejandro Nunez Vicente.

This began on a small scale last year- simply as a college project. Soon, it got nominated for the Crystal Cabin Awards 2021- which is one of the top awards in the aviation industry. Needless to say, the design then got a whole host of online attention after an article was published on CNN.

Ever since the designer of the double decker airplane seat has been making waves. In fact, such has been the attention doled upon this, that Vicente has decided to pursue it full time. He has recently been in talks with several seat manufacturing companies. Also, with such an interesting project, he has also garnered some hefty investments.

This will definitely allow him to lead this project till it’s completely developed. But there have been critics as is the usual occurrence with any form of innovation. One of the major criticisms of this project has been claustrophobia. Most of us feel quite claustrophobic while traveling overseas. Wouldn’t this innovation increase that feeling?

Double Decker Airplane Seat Could Soon Be A Reality

“I grow more from listening to the critics and listening to the bad comments, than from listening to the good comments and the flowers that they throw at me,” Nunez Vicente said. “My purpose here is to change the economy class seats for the better of humanity, or for all the people that cannot afford to pay for more expensive tickets.” It is expected that the double decker airplane seat will be the hot topic at the AIX. AIX or Aircrafts Interiors Expo is one of the biggest aviation shows in the world. And as it turns out, he will be premiering this prototype at the Expo.

The prototype for the double decker airplane seat is quite interesting. It comes with two ladder-like steps which would be used by travelers to reach the top. While it does seem to be a little claustrophobic, it does feel comfortable and roomy. There is also plenty of room for stretching out one’s legs. Now, while the seats in the prototype don’t move, the real ones do. Also, this design completely removes the overhead cabin bunk. Rather, Nunez has used the space between the levels for travelers to stow their luggage.

But Will The Innovative Seat Be Comfortable?

Interestingly, it was Nunez’s frustration with a lack of legroom that led to the creation of this. So, by not having a seat on the same level as the passengers in front, they would have the space to stretch their legs out. In fact, there is also a footrest that would provide added comfort. Now, so many seats around one can be claustrophobic. But if one is looking to simply sleep on the flight, this should be a satisfactory option.

Vicente is quite confident that his design could turn into a reality soon. Yet, he has also acknowledged that most unusual airplane seat ideas don’t turn into reality. The process is quite lengthy and the stringent regulations and rules of the industry are troublesome. Also, the economy seat in an airplane hasn’t really changed over the last decades. And this comes at the same time several designers have brought out interesting concepts.

The designer of the double decker airplane seat points out, “One of the phrases I get a lot, is ‘If it’s not broken, why change it?’ So if passengers still fly in the worst economy class seats, why are we going to give them a better option? It makes money. That’s the goal of the airline at the end of the day, not to make your flight better.” Nevertheless, Nunez is also working on reducing the weight of the entire design. Even with his less than optimistic approach, he has been hoping to get an investor.

“Of course, at the beginning, no one expected this to get this big to the point where we are today. But they all knew that I was going to be able to do something. If you asked me before, I would have said maybe it’s just a university project. If you asked me now, after all the hard work, after all the effort of many, many people– I would say that now this is more of a reality. We see it as the future of the economy class.”