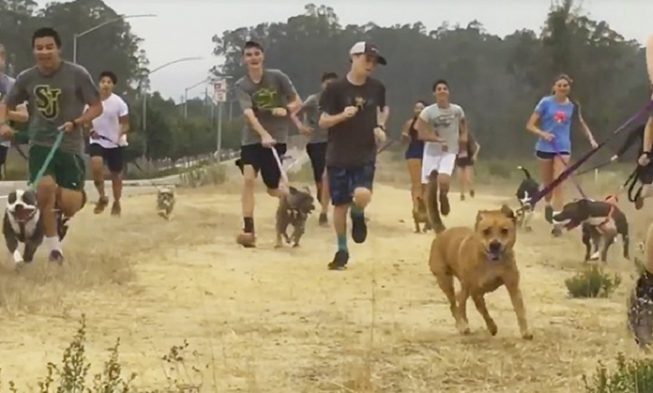 According to The American Society for the Prevention of Cruelty to Animals (ASPCA), because of the animal overpopulation, more than 1.5 million (860,000 cats and 670,000 dogs) are euthanized every year in the US. (1) However, the animal overpopulation has become a huge problem, not just in the US but everywhere in the world and all shelters are overflowing with animals.

Thanks to folks who adopt and sterilize their animals, the numbers are slowly getting better, but that’s still a huge number of the animals collected by the shelters. That is not easy to do because it takes a lot of people to properly care for these furry ones. For that reason, volunteers are always in high demand in shelters all across the country.

Without planning a free time for you it is better not to volunteer in the shelter, as caring for shelter dogs, takes a surprising amount of it. You need to put together their meals, cleaning up after them, and cleaning their pens. They also need walking, which is probably the most time-consuming task of all. It is the real thing to take them out, even for a quick jaunt, but it can take a lot of time.

Dogs are specific animals that have their personality and speed at which they like to go. So spending time with them means, to allow them to enjoy themselves. Their time spent outside makes them happier and healthier. Having that in mind, it would be wonderful if every dog who needed a home could at least have just one person to walk them and pet them, even for a while.

The Santa Barbara County Animal Shelter found an interesting way of how to have enough volunteers. They asked the cross country team at St Joseph High School, who was running nearby, to take dogs with them out on their morning run. This idea was born when the shelter spokeswoman Stacy Silva saw the high schoolers running by the shelter and she thought, ‘Why aren’t they running our dogs?’” (2)

This idea is great for everyone involved! Walking dogs by the members of the cross country team foster team spirit on both the human and canine side of things, and all are getting some cardio in at the same time.

Not only these kids are stepping up where the plight of shelter dogs is concerned, but recently, the state of Delaware made headlines, because it became the first state in the US to achieve no-kill status for all its animal shelters. (3) This is a fantastic attitude of the state authorities in Delaware.

For a shelter dog’s “high adaptability factor” is very important being able to run around, play, and interact with humans and fellow dogs. The dogs need to be able to hang out with other dogs, to be social, just like humans. By isolating the dogs all the time, they will either lose the social skill or never gain it, because the isolation makes them harder to adopt. Even though hanging out with the dog for a while might not seem like much for the people, but it means a lot to a four-legged friend.

Everyone who can consider volunteering at his/her local shelter! It is not necessary to be a part of some teams or organizations, because everyone can do it alone. This is of great help for both people and dogs because both will benefit from it. Dogs just love to walk, smell stuff, and get a few scratches behind the ear, but also they do need interaction just like humans. So, why you shouldn’t spend your extra hour or two per week with these furry ones, because they would, also love to spend that time with you.