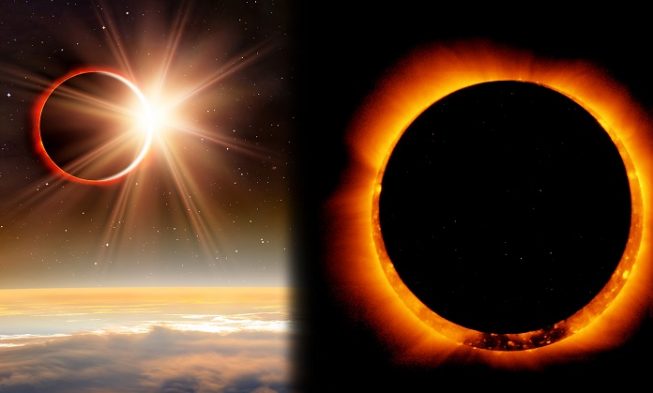 We’ve explained in a previous article about solar eclipses and ones occurring this year as well as the difference between solar and lunar eclipses. To recap, a total annular solar eclipse will take place this Sunday, 21 June. Large parts of the world will be able to see the rare alignment between the Sun, Earth, and the Moon. Most of the time, these eclipses occur during a couple of months which are called Eclipse Season

The season of eclipses usually occurs for a month and more, exactly 31 to 37 days. It takes about six months from one eclipse season to another, meaning that it takes place twice in one year. Nodes are not stationary points which can regress or move, meaning each year, eclipses occur 19 days earlier. During this year, June and December are the midpoints of these eclipse season.

Depending on where you’re located in the world, you can have the chance to see one of three eclipses taking place in the upcoming weeks.

Annular is the Latin definition for “ring-shaped” and its typical for this kind of solar eclipse because the Moon creates a ring shape once it aligns in the middle of the Sun. Another name for this phenomenon is the “ring of fire” as it’s known to astronomers. The “ring of fire” typically happens when either the Moon is too far from the Earth or the Earth is closer to the Sun, making the Sun large enough so that the Moon doesn’t cover it completely.

For several minutes, the moon will be passing in front of the Sun. However, the total eclipse only occurs for less than a second so make sure you don’t miss it!

Unfortunately, only people across Africa, Central Asia, and South East Asia will be able to see the full extent of the total annular solar eclipse this Sunday.

The path will begin in Central Africa at sunrise (Republic of Congo). Then, it will travel to north-eastern parts of Congo toward the Central African Republic and move through South Sudan, Sudan, Ethiopia, The Red Sea, Yemen, Saudi Arabia, Oman, the Gulf of Oman, Pakistan, and India.

After that, it will move east and southeast, allowing people in China and Taiwan to see this phenomenon. Finally, it will pass to the Philippine Sea, then south of Guam, and end at the North Pacific Ocean at sunset.

In different parts of the world such as a big part of Africa, Asia, Indonesia, and some parts of southeast Europe will be able to see a partial eclipse during the opening stages. Northern Australia will be able to catch the end before the sunsets.

Other parts of the world such as the UK and the US won’t be able to see even a partial eclipse.

Another total solar eclipse (not annular) will occur on 14 December this year. This eclipse will be visible from Africa, Antarctica, the Atlantic, and Pacific Oceans, as well as South America.

How to View Solar Eclipses

When trying to view any solar eclipse type, there are some precautions that you must follow.

Viewing the Sun with the naked eye without any eclipses can be very damaging. What’s even worse is viewing the Sun through any optical devices like telescopes and binoculars.

As a child, you’ve probably played around with a magnifying glass and burned leaves (or at least seen someone do it). This is exactly what will occur if you try and use optical devices. The sunlight will be focused on a small part of the lens and start a fire, or in this case, burn the retina of your eye. This can cause permanent damage to your sight and can even leave you blind. Because there are no pain sensors in your eye, you won’t feel it happening.

This is why it’s important to wear special eye protection when viewing a solar eclipse. There are special glasses (not sunglasses) made to view eclipses.

There are lots of techniques you can use and gadgets to make so that you can view the Sun like making a pinhole projector, optical projection, or using filters. However, make sure that you don’t use sunglasses, smoked glass, polaroid filters, x-ray film, exposed color film, or photographic neutral-density filters. As for how to make any of these gadgets, there are detailed instructions online, so feel free to search if you want to view this rare phenomenon!

If you want additional tips about viewing the eclipse, check out the video below posted by NASA: