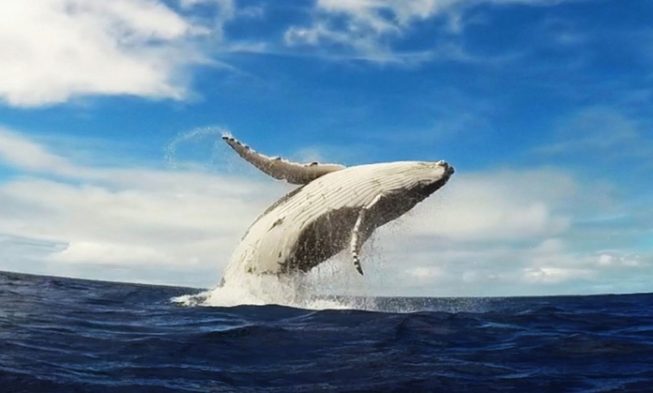 According to the sea scientists, an adult whale can grow to weigh 36 tons, which is equal to the weight as 24 adult hippos. It is also interesting to know that this gigantic mammal is even capable of leaping out of the water and one case of this phenomenon was captured on film in 2017.

A scuba diver Craig Capehart captured video (below) while he was sitting in a “rubber duck” inflatable boat. When the graceful giant made an appearance, Capeheart was in the Indian Ocean off the coast of Mbotyi. According to him this humpback whale weighed around 40 tons.

In the caption accompanying the video, Craig wrote that this is the first recording made of an adult humpback whale leaping entirely out of the water. According to him, this event is really rare, which is not the case with dolphins and even Great White Sharks that have been seen flying out of the water.

This video below will show you this attraction, so watch it carefully.

Why do whales jump out of the water?

The BBC explains the behavior of the whales, emphasizing their activity above the surface. The theory of the scientists is that whales, like the humpback whale in the video above are slapping the water to communicate.

Here is another video that offers a more in-depth explanation: