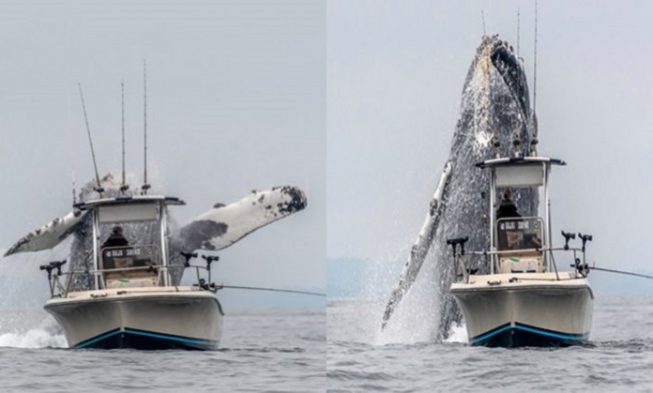 More and more situations occur daily which shows us that our Nature is a wonderful and intriguing thing. Many different creatures exist throughout the Earth and they differ in size from really tiny like mice to gigantic like whales. Whales have been a great excitement amongst humans, enough for whale watching to become a favorite thing for tourists. Lately, one gigantic humpback whale gave one such show to workers of a fishing vessel.

The humpback whales are one of the largest existing creatures on our planet and can grow up to 52 feet in length. They are a type of baleen whale and can be found swimming in oceans across the earth at different times in the year. During the winter, humpback whales usually go to the warmer waters near the equator, whereas in the summer, they tend to go in higher altitude areas like the Gulf of Maine and Gulf of Alaska. However, in the Arabian Sea, humpback whales live throughout the entire year.

Humpback whales were listed as endangered species in 1988, however, since then the population came back with about 60,000 whales.

Humpbacks usually push themselves out of the water and come right back down, resulting in a gigantic splash, also known as breaching. Experts say that the reason for the whales to be breaching is to remove the additional debris and parasites latched onto them. However, when you see a whale do something like that, you have to think that it’s also fun for them too. Other experts claim that breaching can be part of their health, dominance, mating, or other social behaviors.

Lately, fishermen that worked at Monterey Bay, California, got to experience an amazing sight. They saw a humpback whale breaching very close to their fishing boat. Many of them took photographs and videos of the whale jumping from the water and back into, creating a gigantic splash.

Douglas Craft, a photographer at the scene, captured the moment and shared his insights. He said that the boat looked silly due to its size compared to the whale. He also added: “The whale is huge! If I’d been the fisherman, I’d probably need some new underwear. I went below deck to shoot from a porthole close to the waterline. That’s what gives this amazing perspective of looking up at the whale”

Craft was accompanied by Kate Cummings. Kate is a whale watcher who also took photos and videos of the whale breaching.

“It was fun capturing this video. The whale had already breached multiple times much further away from the fisherman. But sometimes when whales breach multiple times, they’re also heading a specific direction when they’re underwater building momentum for the next breach. I figured the next breach would be around the fisherman because the whale was heading that way and sure enough! Though I didn’t expect the whale and the boat to line up so perfectly.”

Make sure you watch the video of the whale breaching. It’s an amazing sight to see, even on tape.