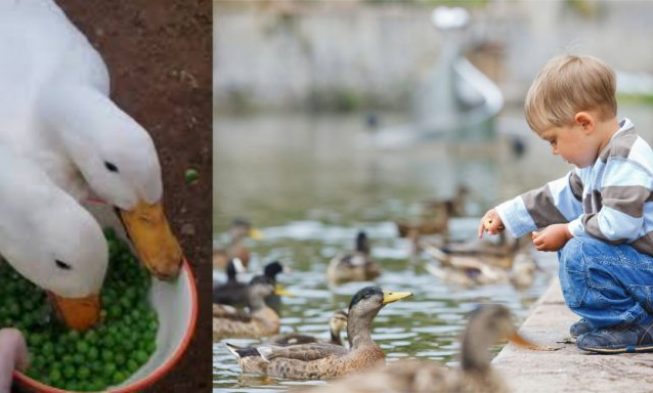 When we were kids, we probably tried to feed ducks with bread. Some of us may recall a blurred memory of gee and a slice of bread on top of a younger sibling’s head. Children like to interact with animals, and ducks are one of many. Little ducks running around and eating crumbs being thrown to them is pure joy for little ones. However, the majority of us don’t know the effect bread has on their health and it’s a big reason to stop this practice.

Bread has the same effect as candy bars have on kids. We all know it doesn’t harm when given from time to time. Sugar-based diet can lead to excess, unhealthy weight gain, malnutrition, and eventually death. It impacts the health badly in both humans and waterfowl.

It is fun to feed them bread- it is a habit that many of us practice. But the question is- what harm could we be doing?

If they are eating bread, they instantly become malnourished. Ducklings can quickly learn to gravitate towards handouts (if there are some left). Afterward, they will forget to rummage for their natural diet.

Ducks can be attracted to high-calorie food, which will lead to overcrowding in a very unnatural way. Aggression is a common reaction when too many ducks find themselves in the same place. Then again will come the negative turnout- more ducks, more predators. With this behavior, they put themselves in high doses of danger.

When humans won’t stop feeding ducks, piles of food are left behind. That can stimulate the growth of algae. Algae take over plants that are beneficial for their health and are a source of food. The plants also maintain a healthy and balanced wetland. Without them, aquatic life is endangered because of pollution.

More ducks eating means more poop. When feeding ducks with bread, many diseases may occur. For ducks, bread filled poop is not a healthy poop. Food from a natural diet breaks differently than the one form heavily processed unnatural sources. Moldy bread is bad for ducks, as it can cause aspergillosis- a fatal lung infection that can take out the whole flock of ducks.

Pests can be brought from rotting food form innocuous feeders, and pests bring unwanted diseases. Mice and rats bring diseases that can be fatal for both waterfowl and humans.

With all said, consider throwing leftover bread, donuts, or popcorn that you intended to feed ducks. Try to follow the other options when you want to feed them.

What should you try?

Try not to give them anything. Consider this: while you are visiting the pond once a month, hundreds of people walk around every day. Imagine if every single one gives them food, what will happen? They get attached to these handouts pretty easily and can become dependent on that kind of diet. Next time, try to watch the ducks, explore the nearby nature, and teach youngsters valuable lessons.

Always be aware of aggressive ducks. Those who crave handouts may become threatening. Gees are known to develop this behavior. They protect the little ducklings.

Food left on the ground, mixed with parasites and water can rot. When ducks have eaten enough, they will leave the leftovers. Too much unhealthy food causes health issues. As ducks don’t chew, offer your food in small pieces.

Don’t leave a mess behind. Always clean up after yourself by throwing leftovers in a bin. If someone is leaving their trash behind, remind them, or pick it up. Plastic is another source that contaminates nature. So please, throw any plastic or stop using it whatsoever.

Clean up after yourself. If the food you brought comes in a bag, throw it away when you are done. If you see someone else leave their trash, pick it up. Remember, more problematic than bread to wildlife is plastic. In fact, just go ahead and quit using plastic altogether.