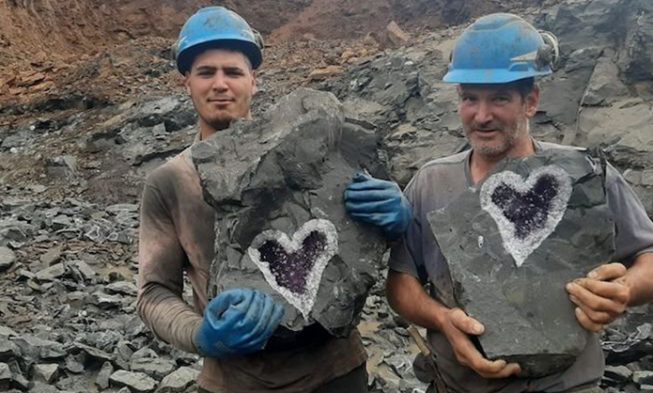 It’s absolutely strange that we adopted the thinking of a point at the bottom and a cusp at the top to signify two equivalent curves meeting as a heart.

Sure, it’s a sign that we all now believe to be the heart, the roots of which are nested in the 6-5th century BC, but an actual human heart looks nothing like it.

But it’s a cute sign, no matter what, that we automatically remember everywhere as a symbol of love. Well, it turns out, as seen in this geode that some miners recently discovered, nature approves of this sign.

So here’s the story: At Uruguay Minerals’ new Santa Rosa mine in the Catalan region in Artigas, an area that is located quite near the border with Brazil, a bunch of miners were working as per usual.

The miners had no idea that this lovely geode was about to expose itself to them. They were simply struggling to get the dig moving. They opened the mine to work regularly, but it was difficult to work on the land and their workers said they were sure they were going to find something very good because of the hard work they were doing. With this once-in-a-lifetime find, their persistence was rewarded.

The incredibly shaped geode was a surprise for everyone and it was no surprise that it immediately went viral. Via its website, Uruguay Minerals sells their finds. And yes, you can also find this particular one that they named ‘The New Treasure.’ If you are one of the many people who would like to own it, contact them via their website. There are also smaller amethysts, polished and shaped to imitate hearts, available on Etsy through various sellers.

Quite a few people responded with the utmost surprise, saying that the geode looks unbelievably cute. Others think that this might just be a sign of the planet’s affection, and we should start treating it more with love, hinting at all of the problems of human-caused climate change.