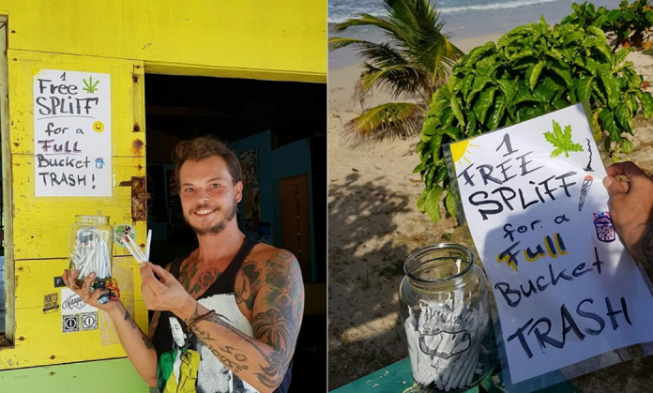 Only in Jamaica, you can save the world and get high at the same time. Just go there and stay at the German hostel called Germaican. By collecting a bucket of trash on the beach, the hostel will reward you a spliff.

In early July, the hostel made a post that quickly went viral. It made an advertisement for giving away free spliffs as an exchange of buckets of trash. Lovers of cannabis were quick to take up on the offer,

Marian Erbach was the one that implemented the gift-giving experience. The 33-year-old German native lives now in Jamaica. He became really upset with all of the trash, especially plastic, over the beautiful beaches of Jamaica. He made a plan to trade spliffs for people that help him clean up the trash.

After making the post, Erbach started rolling 56 grams of weed into 56 spliffs. Even if he wanted to roll more he couldn’t since Jamaican law forbids it. By the law, 56 grams is the maximum amount of marijuana a person can carry without being arrested. However, usually, one will receive a negligible fine.

Posted by Germaican-Hostel on Thursday, July 4, 2019

His plan worked like a charm and no one was surprised by it. Many lovers of cannabis assembled at the hostel to deliver the buckets of trash and get themselves free weed. However, what’s important is the nearby beaches were almost completely clean from trash and plastic.

EcoWatch reported that over 80% of the trash tossed into landfills eventually ends up in the oceans. All of that garbage either washes ashore or collects with other garbage and makes a giant garbage patch, such as the Great Pacific Garbage Patch. If the trash is not collected, it will eventually break down into micro-particles which will harm the wildlife. Additionally, it will leave toxins in the environment.

Who join us – it's weekend time! #mood#weekend#sunglasses#qualitytime#jamaica#hostellife#oneworld