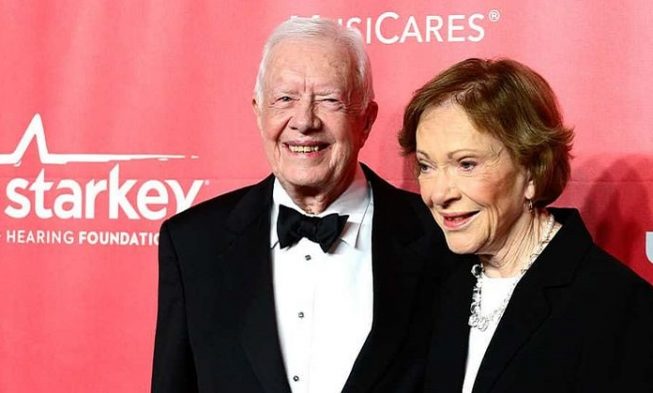 The couple also shared the secret to their long-lasting marriage.

Former President Jimmy Carter married his wife Rosalynn Carter on July 7th, 1946, marking 76 years of togetherness in 2022. Not only is Carter the oldest living president of the US, but he and his wife are also the longest-married presidential couple.

Carter knew his wife from the time she was born!

Carter, 97, went with his mom to see Rosalynn as a newborn baby, when he was just three years old at the time, according to Good Housekeeping.

After their first meeting, which Rosalynn probably doesn’t even remember, they went their separate ways. So how did they get together? Well, according to The New York Times, it happened in 1945 when Carter, who went on to be a midshipman in the Navy, came home on a break and needed a date.

So, he confided in his younger sister Ruth, who said she’d set him up with someone who had a crush on him. You see, Rosalyn had noticed Carter before, when he walked through the quaint little town of Plains, Georgia, in his crisp white uniform.

Nearly six months after their date, Carter proposed to Rosalynn, but the now 94-year-old woman turned him down, because, according to ABC News, she wanted to complete her college. After all, that’s the one thing she’d promised her father when he was on his deathbed.

At first, Carter “grieved and persevered,” when she refused his proposal, but he was not one to give up that easy. He planned to propose to her again. That’s when he gifted her a compact engraved with ILYTG, which stood for: “I love you the goodest.” Luckily for him, she said yes that time, and on July 7, 1946—after Carter graduated from the United States Naval Academy—the two exchanged vows at a Methodist church in Plains.

Now, nearly eight decades since their special day, the couple still stay in the small town that witnessed them grow from little children to lovers to spouses, cites AP. “It’s a full partnership,” the 39th president of America said, during an interview.

The Carters didn’t always have a smooth-sailing marriage but have a piece of very simple advice that helps them through tough times.

“My biggest secret is to marry the right person if you want to have a long-lasting marriage,” Carter said. “Every day there needs to be reconciliation and communication between the two spouses,” the former president said. “We don’t go to sleep with some remaining differences between us,” he said.

Meanwhile, Rosalynn also spoke about the importance of finding things that are interesting to both. “Jimmy and I are always looking for things to do together.” But, this doesn’t mean you stick to each other like glue, because “each (person) should have some space. That’s really important.”