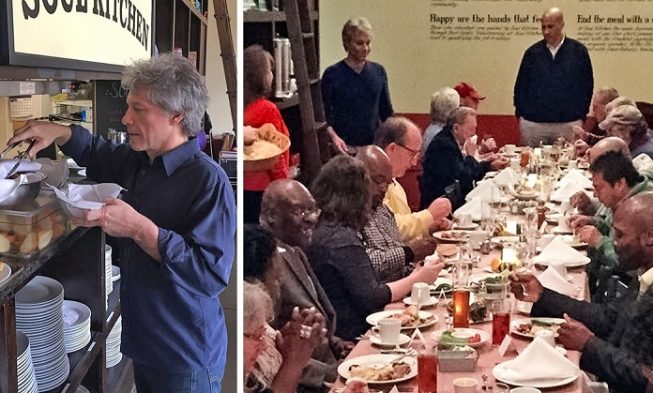 Jon Bon Jovi is a famous person with several unusual things. He is well known for wearing many hats. He’s a very influential rocker in the music industry, and additionally, he’s been acted on numerous famous TV shows including Ally McBeal. Several times was on the list of the most attractive artists but is also determined as a political activist. However, here is one interesting activity that is less mentioned recently, it is his charity work. He is the owner of 2 restaurants where people without many resources can enjoy food without paying.

According to Bright Side, this project has already served over 104,800 meals for people in need.

“All are welcome at our table.”

The JBJ Foundation manages the Soul Kitchen, the nonprofit organization, led by the artist. The meals at Soul Kitchen don’t have prices, and paying the bill is only optional, only for those who can do it. They are asked to make a $20 donation, and those who aren’t able to pay, even people who are homeless, are also welcomed into the restaurant. They can eat there, but can also volunteer later in the kitchen.

The facts found on the restaurant’s website show that more than 50% of the meals they’ve served were paid for by donations. The remaining meals were covered by the voluntary work of people without financial resources. For that reason one of the restaurant’s mottos is: “All are welcome at our table.”

The first restaurant was opened on October 2011, in the Red Bank area of New Jersey, where Bon Jovi was born. The second facility was opened in 2016, near Toms River, after the damage made by Hurricane Sandy, which shook the country in 2012.

Bon Jovi explained: “Our mission has always been to affect positive change and address the issues of hunger and homelessness,” and he added “There are no prices on our menu. So if you are in need, you participate. And that means bussing the table, washing a dish, working in our gardens.”

Another rule is that in the restaurants are not specific rules, there are no reservations and tables are shared with strangers. The reason why it is done is to make social interaction more natural and smooth for everyone, regardless of their economic conditions. The priority to sit is based on all those who are most in need of a hot plate.

A 3-course menu with organic and nutritious ingredients

The menu changes every 10 days and consists of 3 courses inspired by local American cuisine. So, first, the customers get either a soup or salad. In the main course, they are getting either white or red meat or fish, but there are also available vegetarian and gluten-free options. The dessert varies according to the season. The cuisine is based on the meals with nutritious and organic ingredients from the restaurant’s garden itself.

The costumers can get information about the menu on the restaurant’s website.

Housing and roofs to “break the cycle of poverty”

The charity of the JBJ Foundation doesn’t end here, they built homes in the city of Philadelphia for the homeless, including war veterans and young people. Additionally, they financed a shelter to provide beds and medical care to the homeless and funded the construction of a center that helps teenage moms and their babies.

A clear mission of the foundation created by Bon Jovi and his wife, Dorothea Hurley is: “To break the cycle of hunger, poverty, and homelessness through developing partnerships, creating programs and providing grant funding to support innovative community benefit organizations.”

They also launched a program that teaches people how to develop skills to do better at job interviews, how to write effective resumes to employers, and provides them with free financial, labor, and legal advice.

Bonus: Unknown or forgotten facts about Bon Jovi – “You. Me. Last chance!”

•          His mother, Carol Sharkey, was a famous bunny on the cover of Playboy magazine, but also responsible for her son’s love for music.

•          The same year he was nominated for an Oscar, but Madonna took the statuette for the song Sooner or Later from the film Dick Tracy.

•          He is very sensitive to light and tobacco smoke, as he is suffering from eye hypersensitivity. This is the reason why he usually wears sunglasses.