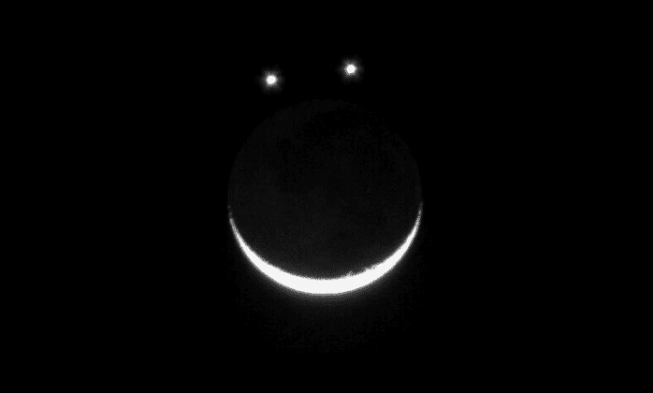 The moon along with Jupiter and Venus will be aligned in a position that will create a smiley face in the skies.

This phenomenon is a rare appearance called conjunction. The rarity of the phenomenon makes you want to not miss it. Last time the moon and the two planets aligned in such a form were in December 2008 which is 12 years ago. After so many years passed, it’s finally going to happen again on May 16th, so keep watch for it.

This rare phenomenon has already happened many times in the past. In 2007, the Philippines experienced a similar sky light up at night.

Space.com shares a good definition of the occultation, or alignment of the planets, stating that it “happens when one object passes in front of another from an observer’s perspective. A simple example is a solar eclipse. From a certain area on Earth, the Moon passes in front of the sun and either partially or totally blocks the light. So, we can say that the sun is eclipsed or occulted.”

Occultations have happened in the past like Venus passing in front of Jupiter in 1818. The same phenomenon will most likely occur again in 2065.

Despite the similarities, this occurrence that will happen on May 16th is not an occultation. Instead, it’s a phenomenon called conjunction and RMG explains its definition “In astronomy, a conjunction occurs when any two astronomical objects (such as asteroids, Moons, planets, and stars) appear to be close together in the sky, as observed from Earth.”

More exciting than the phenomenon itself is the way our brain perceives it. Even though the situation is meaningless, our brains will try to take a picture of it and give it a meaning, in this case, a smiley face. In reality, the planets will just align in their normal rotation around the sun.

We see Venus and the moon close to one another once a month. However, Jupiter does not align as close to the moon from the sky which is why this alignment is rare. When it does, however, we perceive it as Venus and Jupiter being two eyes while the moon is the mouth of the smiley face.

#HeadlineChallenge: The world needs reasons to smile – and the solar system is about to give us a helping hand. On May 16, a crescent moon, beneath Venus & Jupiter, will form a smiley face in the sky…@PeteBarronMedia goes with PUT ON A HAPPY SPACE. pic.twitter.com/G6Tmz0Lx34

In 2008, Australia saw the smiley face with Jupiter being the right, while Venus was the left eye of the smiley face. Australians were able to see it at night time around 8-11 pm. Unfortunately, the rest of the world (US and European countries) did not see this occurrence at that time.

The phenomenon will occur again in the skies of Australia in 2036.

Make sure you keep an eye for the occurrence on May 16, 2020. It’s not often that you’ll be able to see the sky smiling down on you.