Keanu Reeves made his debut in the entertainment industry at the age of 17 and was acclaimed in the film trilogy “The Matrix”. However, Keanu is a down to earth and very humble Hollywood star and doesn’t let success get to his head.

Keanu Stays Away From Anything Flashy

One aspect of Reeves’ charm has remained the same since arriving in Hollywood: his clothes. Instead of spending thousands of dollars on designer clothes, Reeves became famous for keeping a rather utilitarian uniform that usually consists of blue jeans, a simple jacket, and chunky, battered boots.

You may not notice, but Reeves’ dressing choices could be seen as a physical manifestation of how he sees himself- just like any other normal person. He doesn’t need flashy clothes, cars, or even fancy villas, because he knows that material possessions are not the key to a happy life.

But when it comes to material objects, he knows how to spend his money to make others happy. A generous donor, Reeves has a habit of giving gifts to people he works with in the movies. It was revealed that he gifted four Rolex watches to his “John Wick: Chapter 4” stunt team. Jeremy Marinas, one of the stuntmen, posted a photo on social media that showed the personalized message his watch had engraved on the back. What an incredibly thoughtful and elegant gift.

But this wasn’t the first time Reeves has given special gifts to members of his film crew. After one of the “The Matrix” movies was filmed, he treated his team of 12 stuntmen with a Harley Davidson motorcycle each, according to an interview with “John Wick” director Chad Stahelski. Additionally, at the end of one of the franchise’s sequels, each member of the film crew, which numbered around 800, walked away with a bottle of champagne offered by the actor.

Treating Each Person As His Equal

Keanu has invested so much time and money in helping the needy. What we do know is that he accidentally offered a seat on the metro to a stranger and was photographed donating to the homeless on more than one occasion. Keanu has donated a large portion of his income to cancer research centers. Keanu’s commitment to donating to children’s hospitals is no secret, as the actor said in an interview in 2009 that he has a private foundation that “helps help a few children’s hospitals and research against cancer “. He added: “I don’t like putting my name on it, I just let the foundation do what they do.” Despite his personal issues, the actor always finds time to say hello to his fans and give back to those who desperately need it. 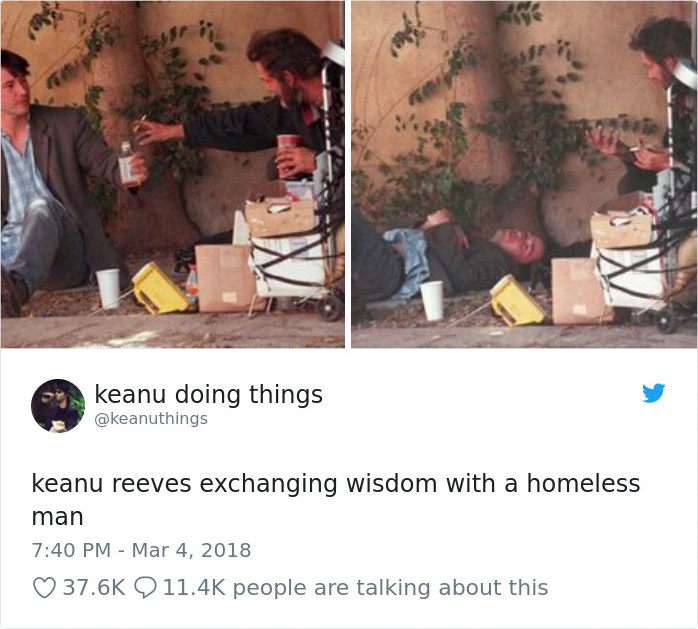 Celebrities have more power and we need more of them to be like Keanu just because by being the best of himself, he is teaching the world some valuable life lessons.