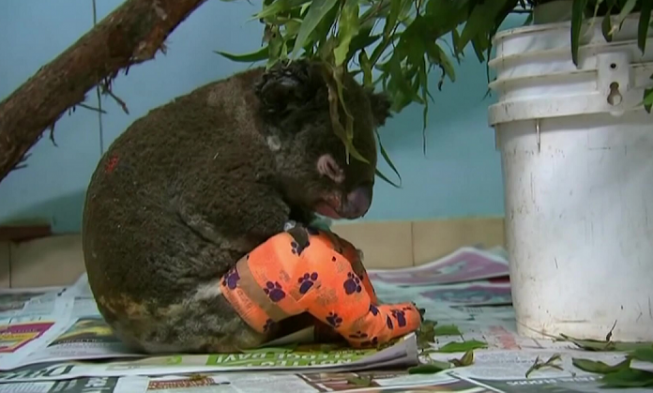 One of the most beloved animal species, the koala, is nearly extinct due to the wildfires in Australia which are laying waste to the natural habitat of these species.

Even though experts said that only hundreds of koalas died in the bushfires that happen in New South Wales and Queensland in the last few months, the chairman of the Australian Koala Foundation, Deborah Tabart, claims that over 1,000 of the creatures were killed in the deforestation and fires.

Tabart claims that this left the koalas “functionally extinct” and unable to recover.

The term “functionally extinct” means that the population of an animal has so few pairs that it’s very unlikely to produce a new generation, according to BBC. Additionally, it describes species that breed in thinned-out amounts and are vulnerable to getting sick from disease.

Tabart claims that the death toll from the ongoing fire most likely left the koala population in apocalyptic proportion. She stated that:

She stated that more than 350 koalas were killed in the bushfires near the coastal township of Port Macquarie.

These types of fires have also stricken the habitat of koalas in Crows Nest and lake Toowoomba, however, an exact number of dead koalas has still not been confirmed.

Fearing the worst, Tabart explains that “We think there are 18,000 koalas in New South Wales alone, so the bushfires have had a massive impact on their population.”

Meet Kate. She was saved by rescuer Darrel from Bellangry State Forest, NSW east. Kate suffers from extensive burns to her entire body. She is the lucky few. Kate arrived dehydrated & sore but is in the best care at Koala Hospital. Great team effort from donors, volunteers etc ❤ pic.twitter.com/SVyWLjaiTo

Even though some koalas surely survived, it does not diminish the long-term risk that they face.

“Because of deforestation and now the bushfires, there is so little habitat left and trees with eucalyptus take months to grow back” she explains.

Arid conditions and climate change are a threat to the habitat of koalas and they decrease any chance of recovery. Western regions of NSW are not expected to get much rain in the next quarter-century.

We are getting lots of contact from people asking how the burnt koalas are progressing. This is Lake Innes Nature…

Koalas are the international-recognized symbol of Australia and also last year’s mascot for Commonwealth Games.

Tabart has also accused the government of failing to offer protection to the species. Once such protection they failed to give was the Koala Protection act that was written in 2016.

She claimed that “They are equivalent to the Great Barrier Reef. Everyone wants to touch a koala, so you would think the government would want to do something to save them. The plight of the Koala now falls on the Prime Minister’s shoulders.”

This is L.I.N.R. Peter ( Lake Innes Nature Reserve) who has come from the Crestwood/Lake Innes fireground. He has burns…

Koala hospitals have been filled with koalas with terrible injuries and burns. Many people started volunteering and drew support from all across the country.

“We’ve got teams going out on the fire grounds still as we speak, looking for wildlife. We are not seeing a lot, which means they’ve been burnt,” Amanda claims.

A trained koala detection dog, named Bear, is sniffing out charred bushland for injured animals that have been caught in Queensland and NSW bushfires. https://t.co/Ome4hpHUJp #7NEWS pic.twitter.com/MTG8eoppPS

Over $1 million were raised for the injured marsupials by Gordon’s hospital which is much more than the starting fundraising goal that was marked on $25,000.

They hope to install automatic drinking stations that will allow koalas to drink in the areas that are affected by the fire.

Donations mainly started after a video went viral of a woman running into the fires to save an injured koala. The video shows the koala, Ellenborough Lewis, badly injured and burned with a lot of its fur missing. The woman, Toni Doherty, saves the koala by pouring water bottles onto it and wrapping it in a blanket.