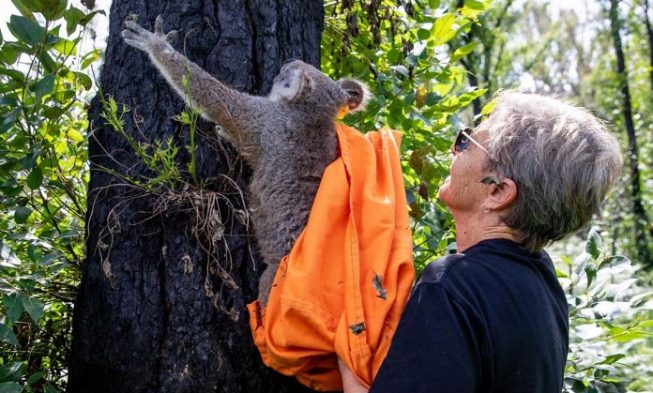 Australia experienced devastating wildfires that destroyed the habitat of many koalas. Not only that, but many of them were killed off or injured. The ones that were found injured were taken care of by conservationists and veterinarians and right now, they are being released to their homes.

Koala Hospital’s caretakers in Port Macquarie, Australia, released about 50 koalas successfully in the wild with some of them being returned to their original trees after being rehabilitated and treated for months.

The Greater Port Macquarie Facebook page made a post about the emotional situation, especially “for the vets, volunteers, and koalas. Their habitat is recovering beautifully with the recent rain and there is plenty of food and water. What a journey! Oh, the stories they will tell their furry friends!”

Anwen is the first female koala who was admitted in October during the bushfires. Video has followed her journey which took five months of recovery from the burns and Chlamydia infection. After the treatment, she was released to her original habitat located in Lake Innes Nature Reserve.

About one-fifth of the forests in the nation were destroyed from the 2019-2020 bushfire season and more than one billion animals were killed. Researchers from ISS (International Space Station) could see the fires from space, so you can imagine the intensity of them. The researchers stated that from space they could see a full circuit of smoke coming around the planet.

The conservationists made a post on their quarterly publication Gum Tips, comparing the hellish situation to ‘Armageddon’. The situation was “horrific, terrifying and so heartbreaking. From October 2019 through to January 2020, it felt like the whole country was on fire with every news media outlet showing.”

Earlier in the week Anwen, the first female koala to be admitted during the bushfires of October 2019, was joyfully released back into her original habitat in the Lake Innes Nature Reserve. We just love this video, giving us a glimpse into a day in the life of the amazing staff and volunteers (and their furry charges!) at Koala Hospital Port Macquarie – thank you! Aaaawwww – go well little Anwen! #lovekoalas #savethekoalas #iloveportmacquarie #fightingspirit #firerecovery #home #regrowth #mytree #thankyou

More than 30% of the koala habitat was destroyed from the bushfires in New South Wales. In the bushfires there, 2,000 koalas were killed. Koalas get most of their needed water from eating eucalypt leaves. However, 2019 summer was one of the driest and hottest ones that Australia experienced, with the drought wiping out the life-giving trees. Koalas were forced on the ground to look for water which added the risk of them getting burned.

All of the koalas that were rescued had a strict treatment schedule. After being admitted to the hospital, the first 24 hours they were only given fluids, pain relief, and necessary nutrition. After being hydrated, the animals were placed under a general anesthetic so that the vets could treat their burns and bandage them. Most of the koala’s injuries weren’t a result of direct flames. However, there were radiant burns caused by the heat of the fire, similar to sticking your hand in a very hot oven.

A lot of the koalas that were treated did not survive, with some of them being euthanized because of the severity of their burns. This included the Ellenborough Lewis, a koala that went viral after a video was posted on social media showing a woman that saved the koala from the flames with her shirt.

Aside from koalas, other animals were treated in the clinics as well such as turtles, kangaroos, and possums.