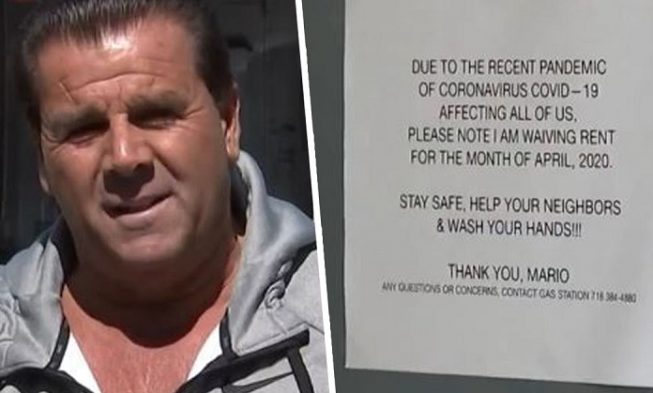 Mario Salerno, a landlord in Brooklyn, put up signs on the front doors of his apartment buildings on March 30, claiming that he is waving the payments from his tenants for April.

At the age of 59, Salerno owns about 80 apartments with more than 200 tenants throughout Greenpoint and Williamsburg. His decision to wave the payments was made when he heard that his tenants were struggling economically with the situation. Because of the quarantine and lockdown throughout the city, people are losing their jobs and cannot get enough money to pay for food, let alone paying rent.

The sign that he added on the front doors of the building read “Please note I am waiving rent for the month of April 2020. Stay safe, help your neighbors and wash your hands!!!”

Salerno also owns a car mechanic called Salerno’s Autobody. After his notice, he became viral throughout the local community and became a highly viewed individual. One person even described him as “one of the kindest people I’ve ever met.”

Mario made an interview with NBC New York where he claimed that he doesn’t worry about losing the income from the rent he received monthly. His only concern is that his tenants are well and safe.

He said that he wishes well for all of his tenants and wants to keep them healthy. What he worries about the most is the “people’s health and worrying about who could put food on whose table. I say don’t worry about paying me, worry about your neighbor and worry about your family.”

Kaitlyn Guteski, a tenant of Mario and a hair salon owner, had to close down the shop because of the lockdown and social-distancing measures taken place. Because of that, she could not afford to pay rent, however, with the good deed that Mario did, she’ll be able to keep stable. Kaitlyn claimed that Mario is her superhero and that he’s an incredible and generous man.

Paul Gentile, another tenant of Mario’s, 28-years old, has lost his job after many businesses started to shut down in March. Gentile was a lawyer for a personal injury firm and most of the time he spent in courthouses. However, on March 18, all courthouses closed down, leaving him jobless.

Paul was not as surprised by Mario’s actions as the other tenants. Paul lived in one of Mario’s apartments for nearly four years and claimed that Mario is the definition of what a landlord should act like.

He claimed that it’s hard to find such a relationship, especially in New York City. Paul claimed that Mario “alleviated a huge amount of stress that I have been having with the unemployment system in the state.”

Hopefully, more landlords will hear the actions of Mario and follow them. Everyone should be as humane as him and help others in times like this.