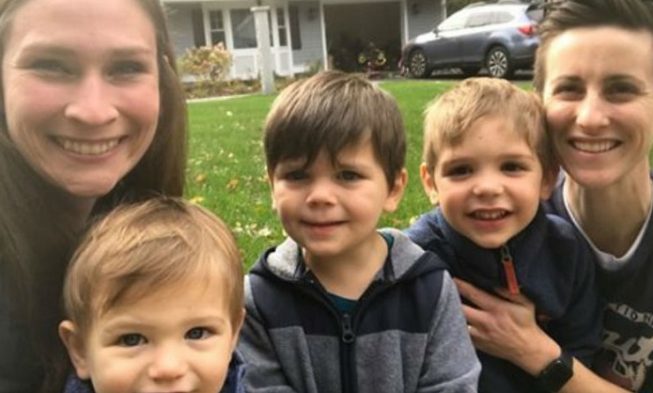 There are so many kids who are sent to adoption centres quite often. The sad truth is that not everyone is lucky enough to find a home that will last forever. But what is even more disappointing than that, is when it comes to siblings.

It doesn’t necessarily mean that abandoned siblings will end up being adopted by the same parents. However, there’s been this same-sex couple who made sure to gather three separated brothers and grow them up together as a family.

A lesbian couple in Massachusetts adopted three little brothers, under the age of four. They truly hope that they’ll give these boys the chance to grow up together as a family.

The story is about the same-sex couple KC and Lena Currie. They first adopted the 18 month old boy, Joey who they fell in love with immediately. They first saw the boy at the adoption event that Children’s Friend hosted.

After a while, they got another call from this adoption agency which informed them that Joey’s youngest brother also needed a foster home. The couple were excited to extend their sweet family and decided to adopt Joey’s six-week old brother.

However, it came as another pleasant surprise when Children’s Friend called them again after some time. This time, the call was about Joey and Noah’s brother Logan. He was the middle child of the two brothers they had previously adopted.

There was this foster family who wanted to adopt Logan but something went wrong and he remained at the centre. Since the lesbian couple had already been taking care of the two brother, they decided to give them a call and let them know about their middle brother’s little situation.

The couples’ opinion about their decision

The couple knew how important it was for the boys to grow up together as a family. And the Children’s Friend totally supported their decision.

KC and Lena got married five years ago. Now, they are proud parents of three young siblings. They are excited about the moments to come. They are looking forward these boys’ parties, their celebration of the holidays as a family of five members, and of course, watching them grow up together.

The couple truly hopes that their story will inspire many people to follow them and to adopt kids. They showed that despite all the adversity and obstacles, the power of love is strong and worth the effort.