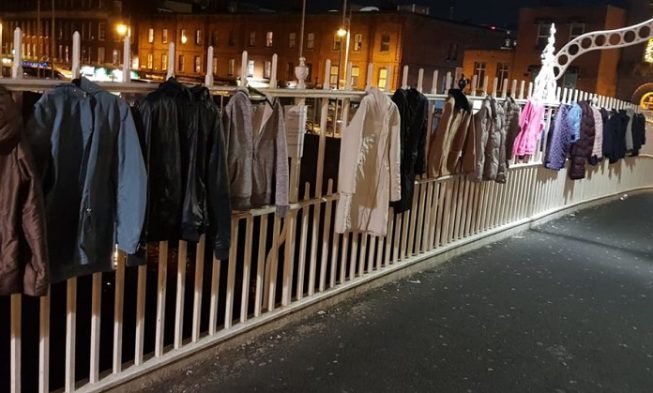 A great initiative has started in Dublin, Ireland, where people start donating their unwanted coats by hanging them on the Ha’penny Bridge for the homeless to take.

People sing along the walkway: “If you need one, please take one. If you want to help, please hang one up.”

Many photographs have been posted online of the jackets and coats people have donated. All of these clothes of all sizes and shapes are hung on the railing of the bridge in the center of the city.

Additionally, pictures are emerging of a plastic box that is full of gloves, scarves, and hats made from wool.

The initiative began and is driven by a page on Facebook called Warm for Winter. Their goal is to help the homeless during the cold months of winter.

They plan to hang up clothes in dry suitable places around towns and cities in Ireland. These places are locations where homeless or poor people walk by frequently.

As soon as the protest started and hundreds of people got out of their homes onto the streets in the Irish capital to protest the growing numbers of homeless people, the news about the initiative emerged.

The Warm for Winter campaign was started by Patrick Fryers. He says that he hopes this initiative will start in other locations.

He stated that “Even if it’s only one coat, bring it to anywhere you think someone might need it and hang it up.”

He will continue to encourage people to donate and collect coats and donate them to the homeless so that they can survive the winter.

He added: “Imagine everyone else doing the same thing, it’s not a big task.”

Additionally, Patrick said that he decided to not cover the coats in plastic. By covering them with plastic, he will stop them from getting wet in the rain. However, he states that because of the winds, if they are covered in plastic, they can blow into the Liffey River.

If you have some old clothes, especially winter ones, go down to your town’s shelter or donate them to charity as soon as possible. Don’t let another man or woman freeze in these hard winters just by having your coat collect dust in a wardrobe in your home.