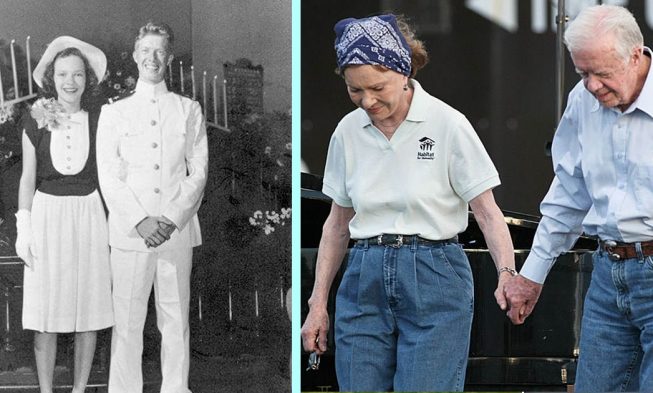 Out of all U.S. presidents, only one was not married. James Buchanan, the 15th president of the U.S. was never married. The other 44 presidents were all married at least once.

The presidential couple that is still alive and has the longest marriage are the Carters.

Who is James Carter?

On his 75th birthday President Carter was asked to name the most important thing he had ever done. Without hesitation, he replied, “Marrying Rosalynn.” https://t.co/eoHlwvVuzb

Happy 74th Anniversary to Jimmy & Rosalynn Carter! They were married in Plains, GA, on July 7, 1946. pic.twitter.com/MfYkdNImXN

He spent 7 years in service as a naval officer before he returned to Plains. He entered politics in 1962 and eight years later he became the Governor of Georgia.

The main ideas that got him elected as a governor were ecology, removal of racial barriers, and efficiency in government.

In December 1974, Carter announced his two-year campaign for the presidency. His campaign gradually gained momentum and was nominated on the first ballot at the Democratic Convention.

As the running mate for his candidacy, Carter chose Senator Walter F. Mondale. His campaign was against the then running president, Gerald R. Ford. The election was won by Carter with 297 electoral votes against the 241 that Ford got.

During his presidency, Carter worked hard to solve economic problems of inflation and unemployment. After he ended his candidacy, he claimed that nearly 8 million jobs were given to unemployed people.

At the current age of 95, Jimmy Carter and his wife Rosalynn Carter (aged 92) celebrated their 74th wedding anniversary. They became the longest-married presidential couple in the U.S. with this milestone.

In October, they officially got the title for the longest-married presidential couple, beating President George H.W. Bush and his former first lady Barbara Bush. Barbara passed away in April 2018 after being married to George for 73 years and 111 days.

The Carters officialized their marriage on July 7, 1946, in Plains, Georgia. This was the same time that Jimmy Carter graduated from the U.S. Naval Academy. Jimmy and Rosalynn were 21 and 18 years old. They’ve known each other for their whole lives because Carter’s sister, Ruth, was Rosalynn’s best friend and they were next-door neighbors.

2015 was a scary year for the couple since Carter was diagnosed with cancer. After a few months, the couple was in luck because Carter went under surgery and innovative immunotherapeutic treatments which cured him of the illness. However, Carter still credits his wife for his revitalization from cancer instead of medical science.

They also credit their faith to Christianity since they are big believers. They read the Bible every night of their life.

With four children, 12 grandchildren, and 14 great-grandchildren, the married couple has been together for over 7 decades of shared memories and hobbies.

Happy 74th anniversary to Jimmy and Rosalynn Carter! It’s a well-known fact that spending time together on a Habitat build leads to a happy and lasting marriage. 😉❤ pic.twitter.com/qSFuVqCZDA