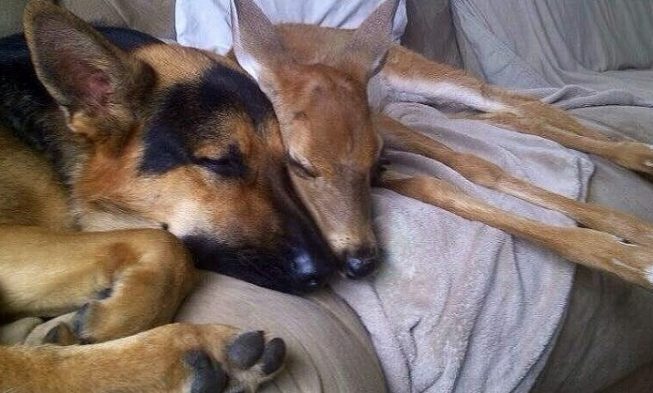 If you ask someone to give you a generalization about dogs, 90% of the time, they will say that it’s their loyalty. Dogs are known to help people or other animals when they are in need or protect its owner either from an attacker or another dog.

Aside from protecting their owners or other humans, dogs protect other animals from different species. They also befriend other animals very quickly, as is the situation of how this dog became friends with an injured baby deer.

A 9-year-old German Shepherd named Sarge unexpectedly made a new very close friend when Cheryl Stephen, his owner, brought an orphaned fawn at home. Cheryl found the baby deer lying on the road and she was afraid of how her dog will react once she brought it to him.

What she witnessed was very unexpected since the dog stepped up instantly and comforted the poor deer. After they became close, Cheryl named the baby deer Buckwheat.

Cheryl made an interview with The Dodo, stating that after she brought the deer home, “something clicked in Sarge and he took to Buckwheat instantly. He wanted to be involved with every aspect of Buckwheat’s care… He took on the role of being Buckwheat’s guardian.”

After a while, the deer started to grow and bring itself back to its feet. Sarge was excited to show the deer around and Buckwheat followed him wherever he was going. Even though Buckwheat was going to grow much bigger than Sarge, he still saw the dog as its bigger brother.

Whenever Cheryl and Sarge would go out for a walk, Buckwheat would join them. Sarge always kept an eye on Buckwheat and swayed him to not wander off and get lost.

An orphaned fawn is adopted by a German shepherd. 💚💙❤️

As time passed, Buckwheat kept growing and growing. He eventually did not need any aid from Cheryl or Sarge and got too big to be kept in the house. This was the time that Cheryl realized that it was his time to return to his home, the wild.

Buckwheat used to sleep so soundly that he'd slide off the couch and wake up on the floor. 😂😂😂He was an orphan we raised from a tiny fawn. This was 2012 or 2013. #deerwhisperer #deerlybeloved #buckysporch #rudeawakening

Even though they released Buckwheat in the wild, Sarge was not done with his deer friends.

His owner kept on bringing other deer for rehabilitation either from injury or if they were left orphaned. Every time, Sarge was more and more excited to be part of the help. Sadly, not all of the deer made it, however, Cheryl and Sarge did everything they could and gave them all the care and love they could.

Whenever she brought a new fawn home, “Sarge springs into action”, claimed Cheryl. Sarge would always keep an eye on them “and he will frantically sniff and nose around to determine their condition. The fawns are drawn to Sarge and feel safe in his presence. Sarge won’t leave their side.”

This little guy was brought to us when he was hit by a car last summer. He was badly injured, but we wanted to give him a chance. He died two weeks later. Sarge never left his side. ❤ We buried him next to the other fawns that died due to Ohio's cruel wildlife laws. His name was "Feller."