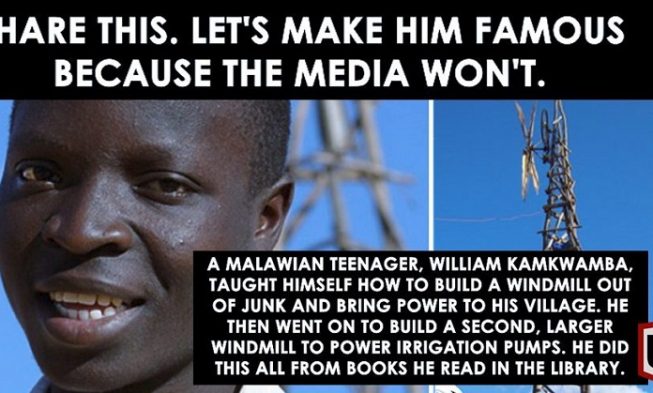 This boy should be made famous all around the world for what he did!

Anonomus posted a message that says the media is not showing any respect for the Malawian Teen William Kamkwamba. He brought power to his village from building a windmill that he made himself from the garbage. He learned this concept all by himself from reading in the library.

He lived a modest life as a farmer, not very familiar with new technology. Despite all that, he ended up opening his mind to new discoveries and made his and many lives better.

TED once claimed: “At age 14, in poverty and famine, a Malawian boy built a windmill to power his family’s home. Now at 22, William Kamkwamba, who speaks at TED, here, for the second time, shares in his own words the moving tale of invention that changed his life.”

William Kamkwamba was born on the 5th of August, 1987 in Dowa, Malawi. He spent his early childhood on his family farm in Masitala Village, Wimbe. William has six sisters, and he is the second eldest of Trywell and Agnes Kamkwamba’s seven children.

After he finished primary school at Wimbe Primary School, he then went to Kachokolo secondary school. Unfortunately, William had to drop out of school in 2001 due to the harsh famine. He was only several months into his freshman year. Because his family wasn’t able to pay $80 for school fees, he stayed at home and didn’t go to school for five years.

But William didn’t want to give up. He started borrowing and reading books at the age of 14, from a small lending library, which was located in his primary school. He took an American textbook called “Using Energy” that had wind turbines illustrations on its cover. William didn’t want to power his family house with kerosene anymore, because it only provided flickering, smoky and expensive light after dark. And that’s the reason he wanted to build a windmill. He collected all the things he needed and started building the windmill. Firstly, using a radio motor he built a prototype of the windmill, and then out of an old bicycle, old shock absorber, tractor fan blade, and blue gum trees, he built the initial windmill. He was able to power several light bulbs and charge his neighbors’ mobile phones after he put the windmill to a car battery.  He even made home light switches and a circuit breaker that was made from magnets, nails, and wires. To catch the wind from above the trees, the windmill was lengthened up to 12 meters.

After this project was made, other projects have included malaria prevention, solar power, clean water and lightning for the six homes in his family. It compounds a deep-water reservoir that included a solar-powered pump to drain clean water, and a drip irrigation system. They were finally able to buy the outfitting of the village team Wimbe United that included uniforms and shoes. The village team was stronger than ever, as they brought many victories with their new sun and wind-themed uniforms. The villagers were proud of them.

Many visitors from around the area found it amusing to see such an invention. Many of them were Dr. Hartford Mchazime, Ph.D., the Malawian NGO who took care of the community library, and the deputy director of the MTTA. The Malawi Daily Times was brought by Mchazime and they wrote a huge article about the young mans’ achievements. This great news reached Emeka Okafor, program director for TEDGlobal. He found out about this story from two engineers, Soyapi Mumba and Mike McKay who blogged about the article. Okafor even invited William to a conference as a fellow and led him to more donors, mentors, and supportive companies who could take care of further projects and education.

After his success with the windmill, he graduated from Dartmouth College in 2014. Later he began his tenure at Ideo.org as a Global Fellow. William was sent all around the world to work on new projects. Now, he is working on a project with WiderNet. He is trying to make the technology curriculum to help people and encourage people to do new inventions. His content will be presented around Malawi and across the continent through eGranaries.