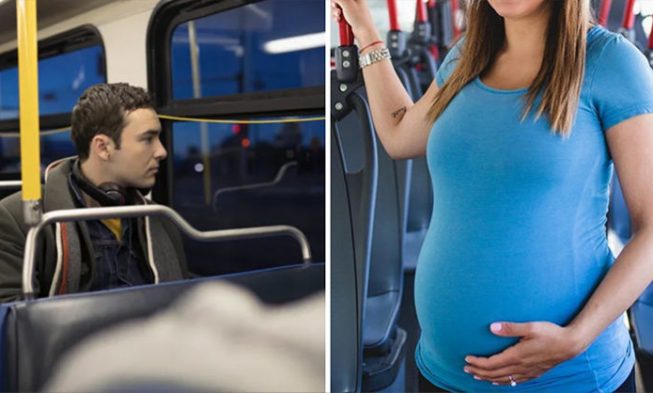 A man started a very controversial discussion on the popular Reddit forum. He provoked the controversy by stating that he wasn’t willing to give up his seat in a public transport to a pregnant woman. The reason because of which he did that was his long working hours.

The man decided to put the story on the Reddit forum and ask for the other people’s opinion. That forum offers people a chance to share some grievance or conflict they’ve been faced with. After posting the problem, the online community gets to vote whether the person behind the story is right or wrong.

The man’s side of the story

So this man, decided to tell the other people about his unusual experience. In his story, he explained that he’s a man, who is working for about 10 hours every day. And it’s not just an ordinary job. Apparently, his job required him to be on his feet all day long. On top of that, after the bus drive, he has to walk for additional 15-20 minutes to get home.

Thus, when the heavily pregnant woman asked him to give up his seat, he explained himself and told her that he’s not going to do that. The problem escalated when the woman started crying and telling him that she is a single mother who can’t afford a car. But the man’s reply to that statement was that everybody’s responsible for his own choices.

He explains that it got even uglier when an elderly man accused him of being rude and impolite. And when he offered the pregnant lady his seat, the bus made a sudden stop and both of them fell. So that’s how his story ends. Therefore, based on all of the above mentioned, his question is if what he did really makes him such a bad person.

Most of the people went really harsh on this man

And that’s when the internet users got all crazy about this attitude of the man. Many of the voters went really harsh on him. Most of the negative comments were regarding his attitude towards the woman when she told him about the situation she found herself in. For most of the people, it’s none of his business to comment on other people’s life choices. Judging her for being a single mom is just the same as judging deformed people for being born. Or even blaming old people for being old. For most of the people he was unquestionably guilty for his actions.

Some people partially supported him

Nevertheless, those people who understand him for being really tired don’t blame him so much, except for the part when he started accusing the woman in a way, for deciding to deal with her little situation. And there were some people who explained themselves in a very nice way. Their comments were that a heavily pregnant woman has a very high risk of getting injured, when compared to a very tired man. For these people the two things are incomparable. He should have given up his seat, so further questions asked.

Anyways, the man asked for online community opinion, and he got it. It’s up to him to decide how’s he going to react the next time he finds himself in such a situation.