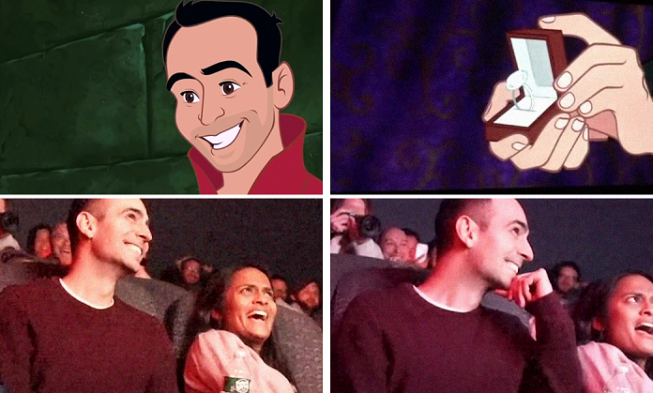 Some girls, no matter the age, still want to be loved like princesses in fairytales and have weddings like those in the fairytale’s movies. Believe it or not, one lucky girl called Sthuthi David will be having the wedding of her dreams. Her boyfriend, Lee Loechler, proposed her in the most creative, yet romantic way anyone can ever imagine. Be prepared for an epically good proposal.

As Sthuthi’s favorite movie is the ‘Sleeping Beauty’, her boyfriend Lee worked hours and hours for the past 6 months to edit them both in the movie. He remade one scene where Prince Lee would propose to Princess Sthuthi.

After he got down on his knee and proposed to the love of his life, he said: “It’s not every day you get to propose to your high school sweetheart”. And her answer was definitely YES! They filmed the whole proposal and the video went viral pretty fast, with over 1.1 million views.

In an interview, he described his plans. “A few years back, a friend of mine told me he was planning to propose to his then-girlfriend, and I suggested he should “Forrest Gump” himself into her favorite movie, and then have his on-screen character “toss” the ring to his real-life self. I don’t know where that idea came from, but it felt fun and magical, and it played into my skill set as a filmmaker. He didn’t think it was right for him, so I filed it away for later use.”

“When things started getting serious with Sthuthi, I started thinking about how I might propose. I still thought that idea had potential, but her favorite movie was animated. And my experience was all in live-action. I know some After Effects, but I am by no means an animator, let alone capable of generating something that would hold up side-by-side with Disney. But, on a whim, I scrubbed through Sleeping Beauty and noted that in the climactic scene there was very little movement. Maybe, if it’s mostly static, I can still pull this off. I went on Instagram and started following various Disney art hashtags, hoping to find an illustrator who was up to the task. It wasn’t until I stumbled on Kayla’s work that the first inkling set in that “this might be possible after all…” 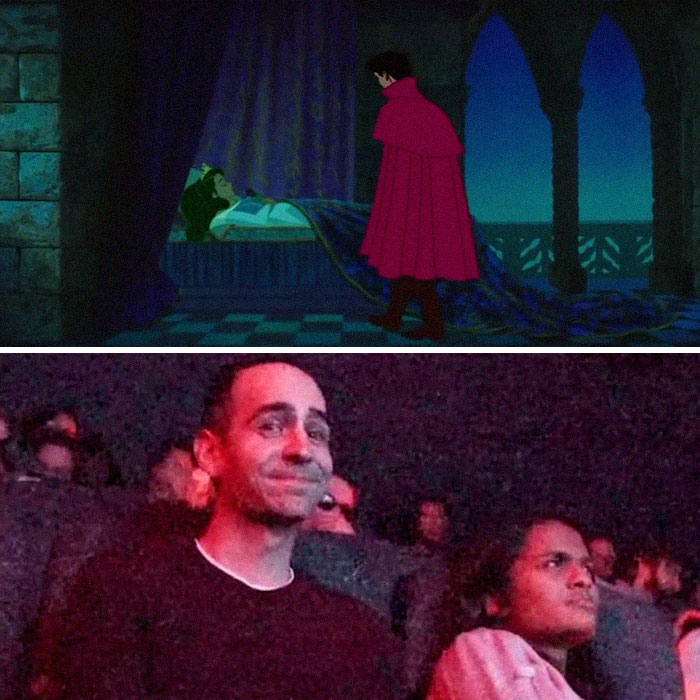 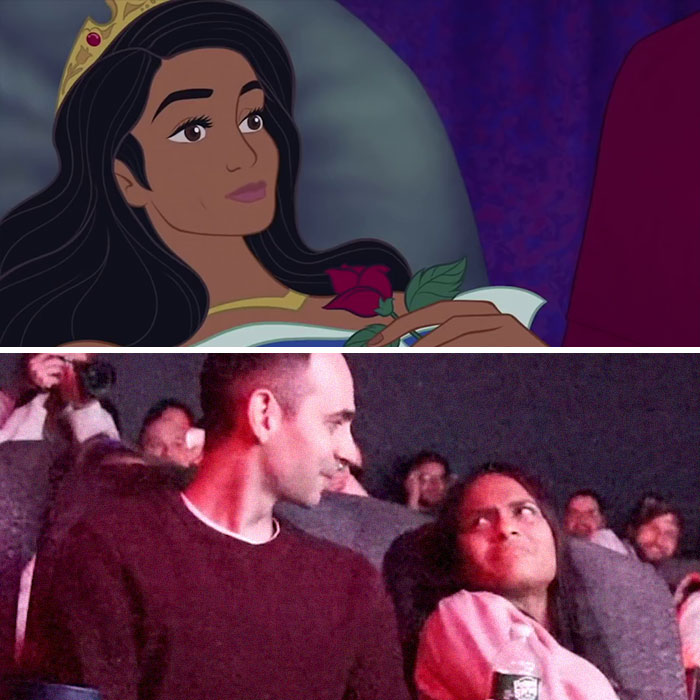 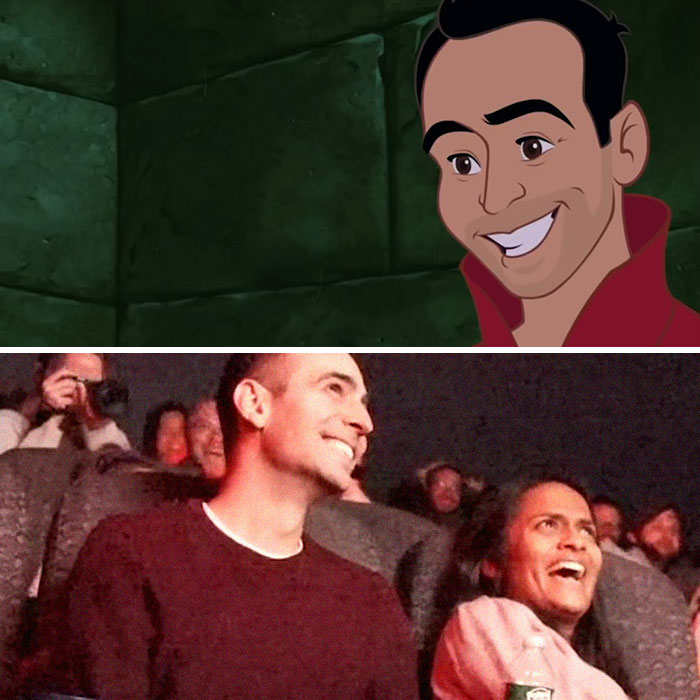 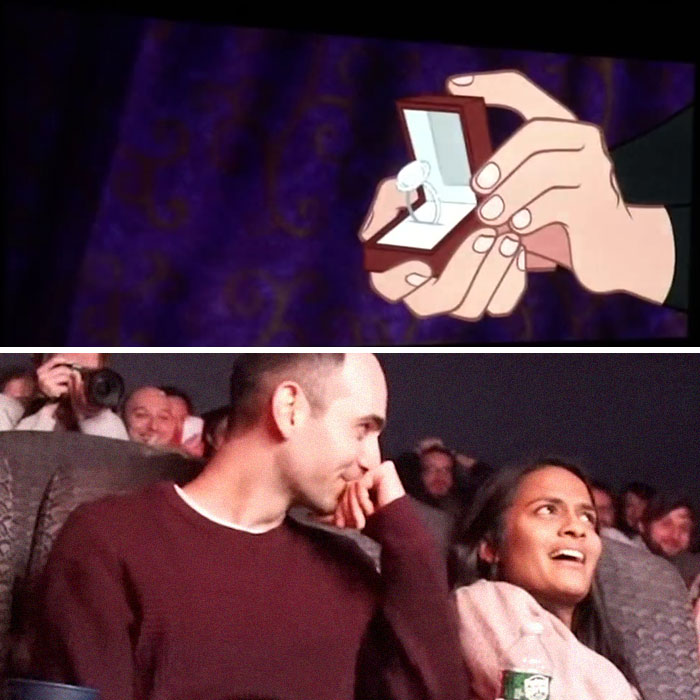 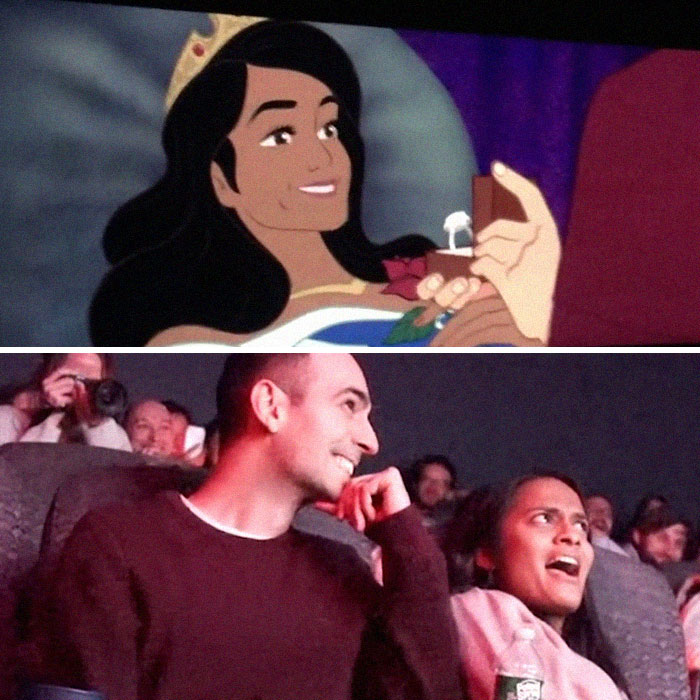 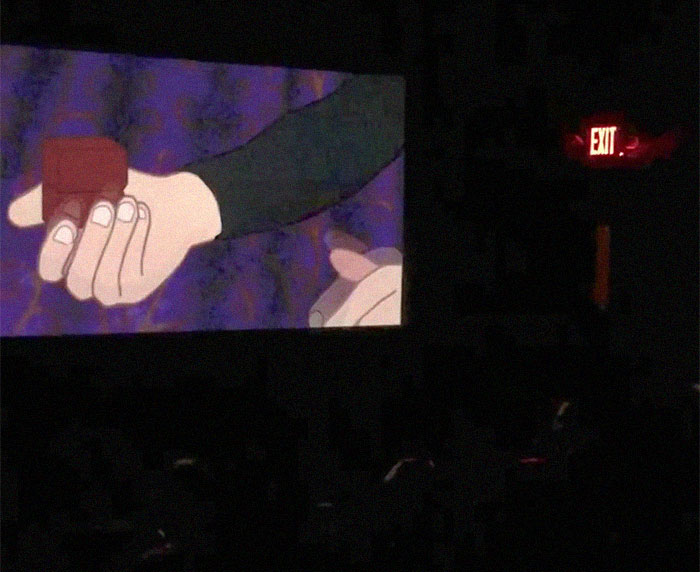 After he proposed, she realized all the viewers at the theatre were family members and friends.

Lee had arranged all of Sthuthi’s family and friends to be at the movie theatre before the two of them come.  “Anyone she might recognize was seated in the back few rows. I worked with the projectionist to make sure all ambient lighting would be off when she entered, to help conceal the familiar faces. Unfortunately, the projector was so bright that the light from the screen still illuminated the whole room. To combat this, we decided to show trailers ahead of the film, which we manually darkened so there wouldn’t be as much light spill onto the audience. So at 7:30 PM when we walked into the room together, it was nice and dark as we found our seats.

“I’m sure there will be Disney elements to the wedding, but we’re still in the nascent stages of planning. That said, if Disney wants to chalk it up as marketing dollars and hook us up with an Aulani honeymoon, we are for sure not above selling out.”

Kayla Coombs helped Lee to make everything perfect. Her job was to change the scene where Prince Phillip kisses Princess Aurora to wake her up. But in the changed version, Prince Lee opens a box with a proposal ring and throws it to real-life Lee.

Lee didn’t mention how many times he had to practice to make this proposal perfect. Nevertheless, he pulled it off amazingly. Sthuthi must have felt like the luckiest girl in the world. 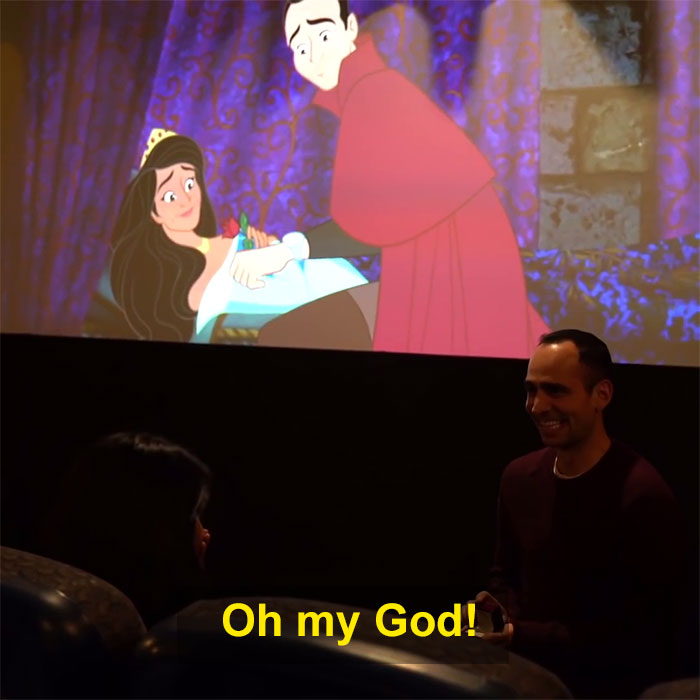 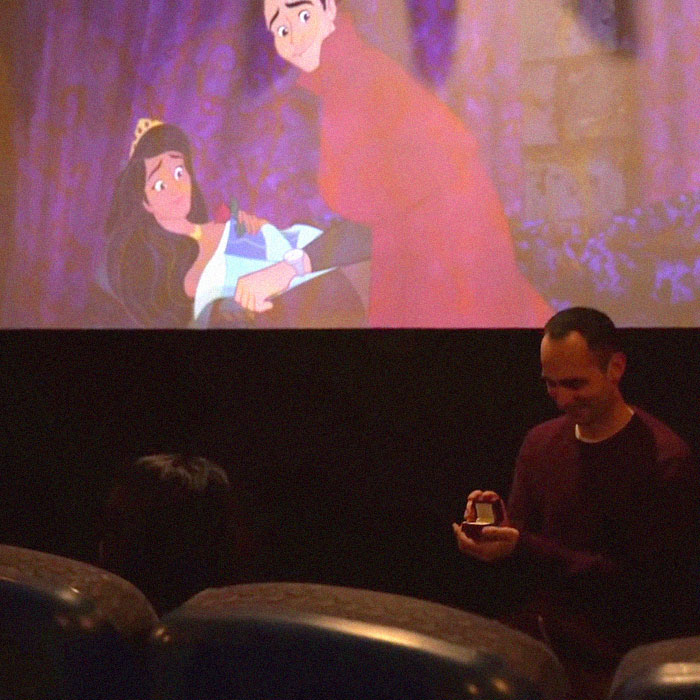 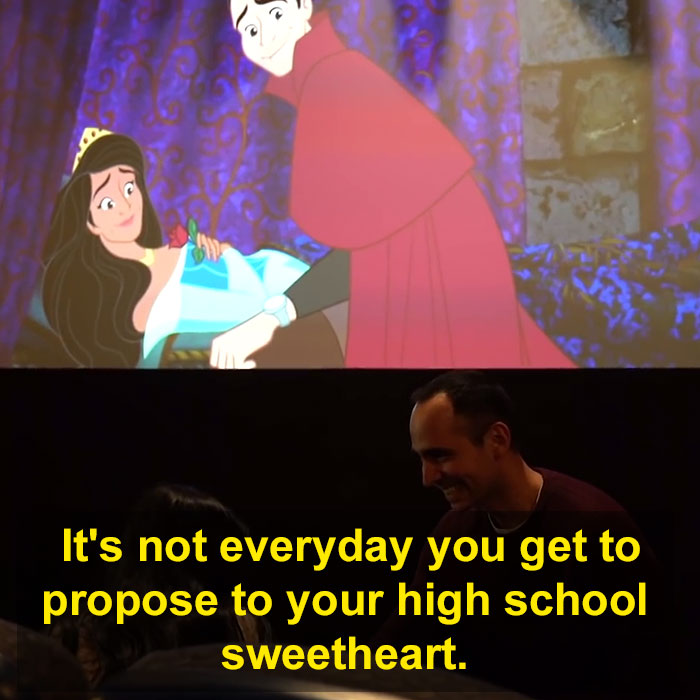 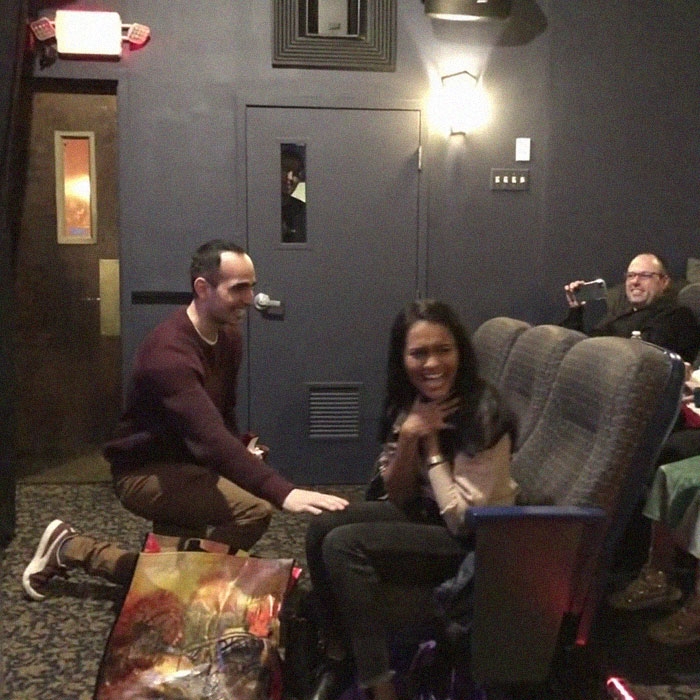 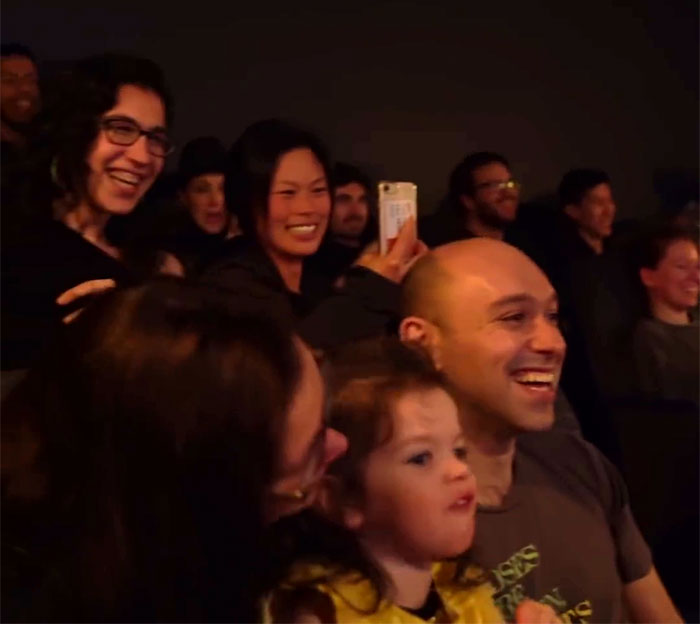 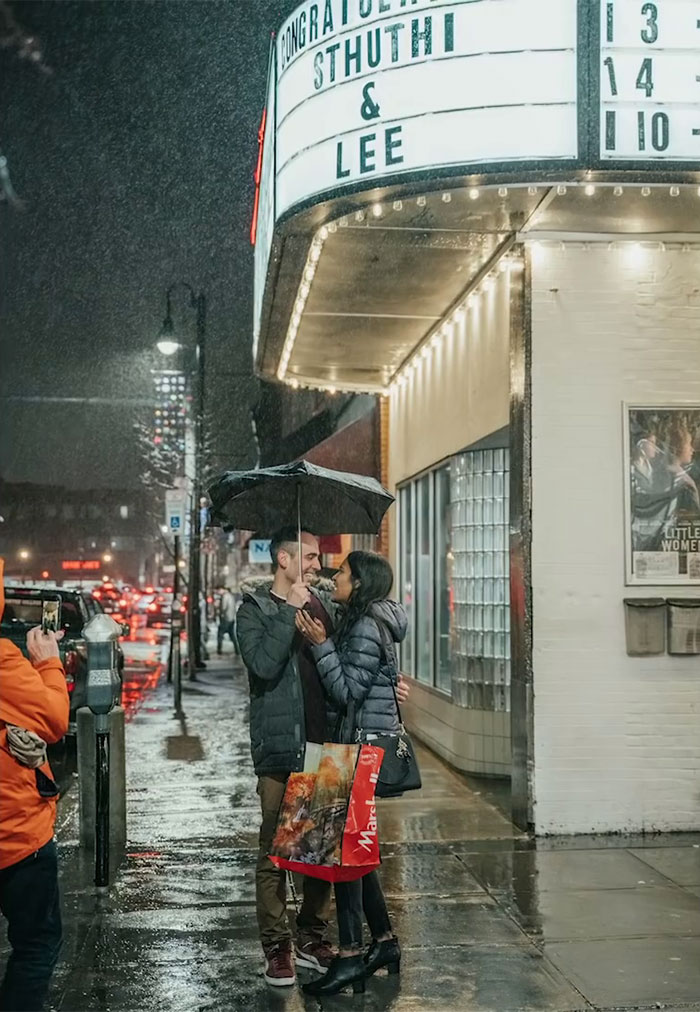 The animated movie ‘Sleeping Beauty’ celebrated its 60th-anniversary last year after it was released back in 1959. However, the film wasn’t as successful as it is today in the beginning. It needed to be re-released many times to become a hit as it is today.

Critics are divided about the movie. Some of them absolutely love it for its music, charm, and colors, but other critics think it has many similarities with ‘Snow White and the Seven Dwarfs.’ And that is not far from the truth. Some ideas for ‘Snow White and the Seven Dwarfs’ were discarded and inserted in ‘Sleeping Beauty’.  For example, Maleficent capturing Prince Phillip to the escape from her castle.

In the end, what do you think of Lee’s proposal? If you are a girl, would you want a similar proposal? Or, are you planning on making one? Whatever you do, do it with the right person, because in the end, all that matters is mutual love and respect.