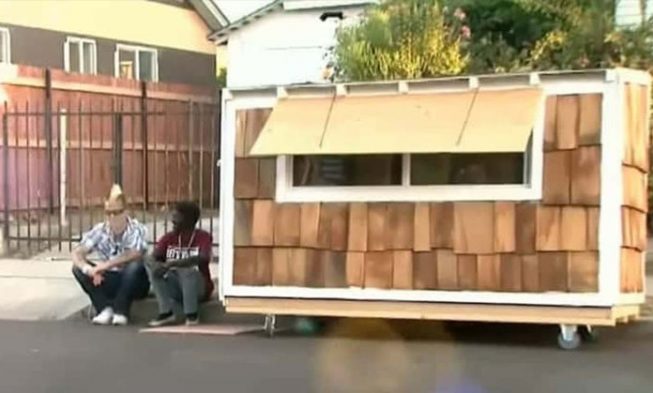 Many people tend to ignore homeless people while they’re passing them on the way to work or grocery shopping. Handing them a few coins or food can be very helpful for them but it does not fix their entire situation. Other times people just completely ignore the homeless, almost as if they never even existed.

Compared to these others, Elvis Summers saw one homeless woman about every day but never turned a blind eye toward her. He even built her a tiny home.

This woman was 60 years old and slept on the ground close to Elvis’s house. The woman is called Irene McGee but she was better known as Smokie. During her homeless days, she knocked on Elvis’s door to ask for recyclables and with these small interactions, both Elvis and Smokie formed a friendship bond.

People in the neighborhood were kind to Smokie except when nightfall came. Smokie was sleeping on the dirt every night after her husband passed away in 2004. Because she didn’t have a job, she couldn’t afford to keep her home.

Elvis was interested in her story and after he found out that she didn’t even have a cardboard box to sleep on, he decided to build her a tiny home. In 2015, Elvis read an article about a man from Oakland that built tiny homes from leftover materials, and he was inspired. After buying the hardware and lumber needed (costing him $500 and procrastination on bills), Elvis started the construction in front of his home. It took him five days of hard labor but Smokie’s new home was finished. After 10 years, she finally has a house to sleep on her own.

The police were okay with her living like that as long as they relocate the home on a different spot every 72 hours. That can be managed easily because the tiny home has sturdy wheels for easy transport. It also contains a wide window and two locks on the door.

Aside from building the tiny home, Elvis recorded the process, hoping that he will inspire others to do the same.

This video was the first of many on Elvis’s YouTube channel called ‘The Tiny House Project’. Elvis also opened up a nonprofit organization bearing the same name. On his channel, he builds homes and advocates for the homeless in LA, California.

Sadly, in November 2016, Smokie passed away. However, her legacy as well as the inspiration she was to Elvis continues to live. Elvis continues to help other homeless people by building them tiny houses but he admits that it’s only a temporary fix.

Homelessness is a giant problem not only for the U.S. but for the entire world as well. It’s hard to figure out how many people are homeless. The reason for this is because homeless people sleep wherever they can find a place to. The only way to count how many people are homeless is through point-in-time counts of people sleeping on the streets or at shelters. This way, we can only determine the number of homeless people on a given night.

It’s very important to find a solution for these people, whether it’s donations for tiny houses or big shelters. Aside from their homing problem, these people also need to be employed so they can take care of themselves and their homes.