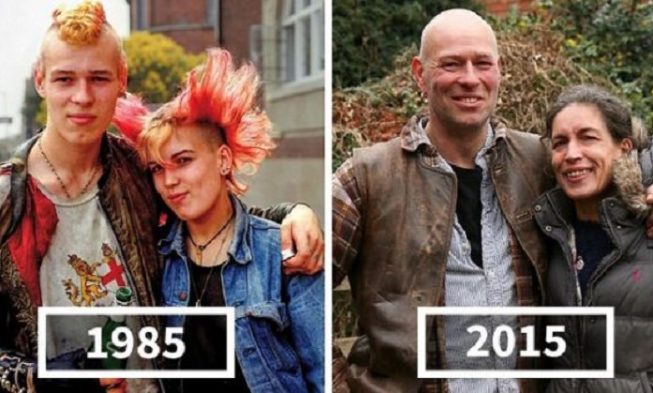 Photography is powerful, and photos are probably the fastest way to recall the old times. It functions as a time travel machine, and has the power to develop whole stories from a single moment.

One English photographer, during the late ’70s, ’80s, and ’90s, spent his days taking photos of random people he met on the streets of Peterborough.

His images were a perfect illustration of life in those days. Yet, almost 40 years later, Chris Porsz, known as the “paramedic paparazzo”, decided to revisit his old project.

For about seven years, Chris kept tracking his former subjects to persuade them to do the same poses as in the initial photos.

“I don’t think anyone else has tracked down so many strangers and recreated photos in this way before. It took tenacious detective work, meticulous planning and, often, unbelievable coincidences, but I must tell you that results are super interesting. They give you a unique insight into how these people have aged over the years and how their styles have changed.”

His project was an opportunity for these people to meet their old friends once again. He collaborated with writer Jo Riley, and made a compilation of photos and stories titled Reunions.

According to his website, some of the reunions were “easy, some were hard, some were impossible to find, but when he was successful, “Chris arranged a reunion at the location of the original photograph and took another picture.”

“This book has been nearly 40 years in the making and I believe the project is totally unique. I don’t think anyone else has tracked down so many strangers and recreated photos in this way before.”

He admitted that he felt “very privileged” and found it “enormously satisfying to do so many reunions and seeing the smiles on people’s faces as they met up with old friends again.”

These are some of these amazing reconstructions: 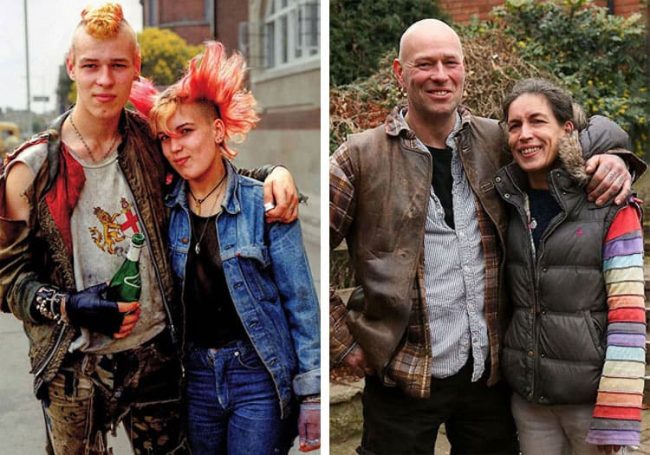 The photo of Tina Tarr and her partner Dog was taken near the Cathedral in Peterborough. They both left the city in the 1990s and went traveling. Although they separated, they have two twins. Tina loves in Dorset these days, hosting weaving workshops, while Dog does hedge laying and gardening and lives in South West Wales. 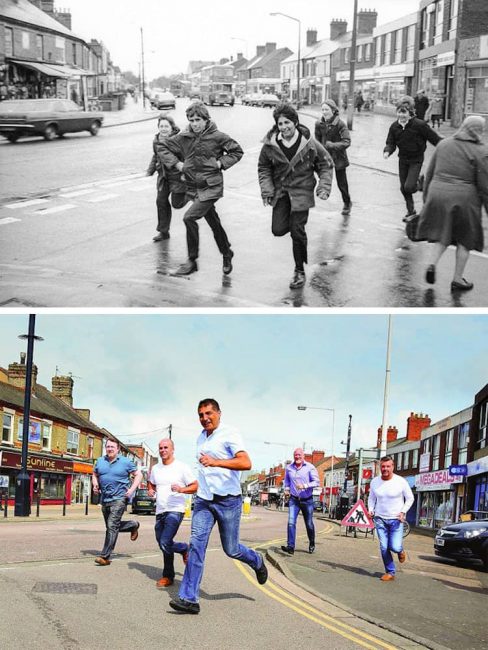 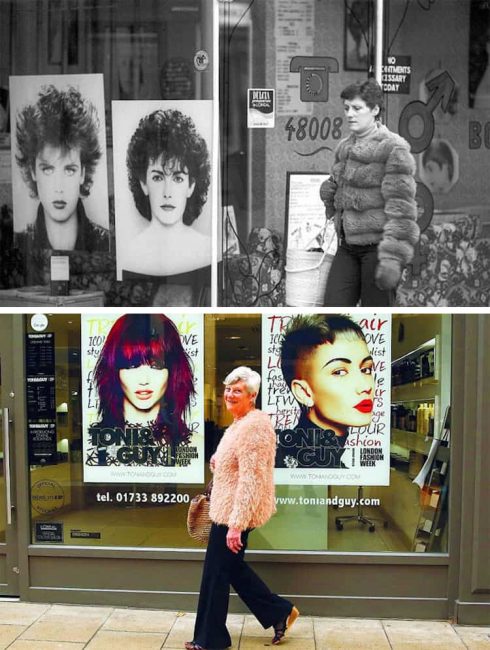 Sandra Burford was pictured going into a hairdresser’s. She is now retired, widowed, and has a daughter and three grandsons. 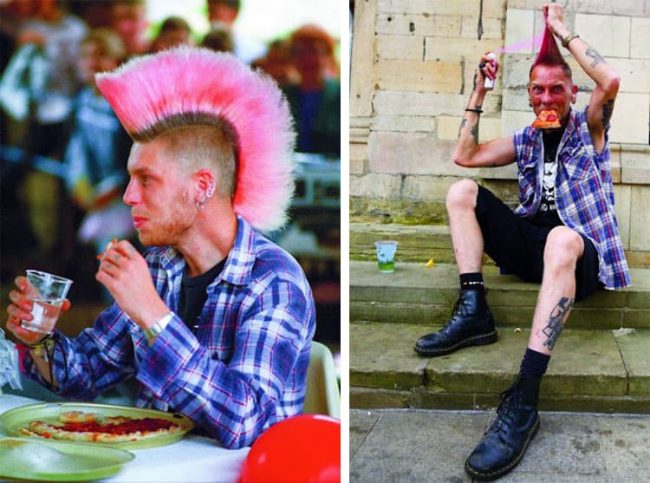 Punk Badger Farcue, 20 at the time, won the Pizza Eating Competition in Cathedral Square, organized by Stefan Malajny, who ran the Papa Luigi pizza restaurant. Badger moved to Somerset in 1991 and has five children. 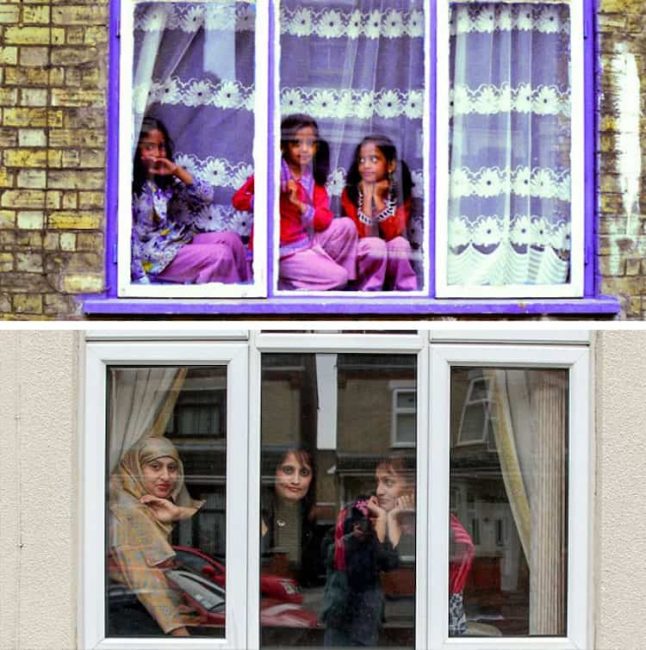 These cute little beauties are Shehnaz Begum, her twin sister Rukhsana, and their older sister Itrat. They still live in Peterborough. Shehnaz is divorced and has a daughter. Together with her twin, she looks after elderly and disabled people. Rukhsana is re-married and has five children, while Itrat is married with six children. 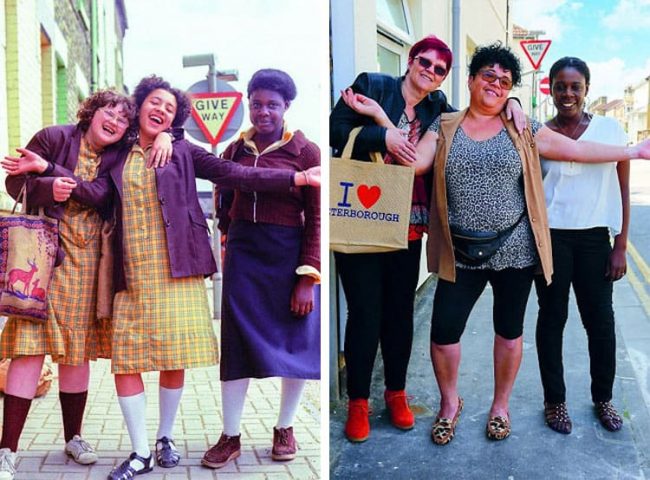 Sandra Williams, Carmen Chin, and Maureen Mayers were friends from County Grammar School. Yet, they lost touch over the years. Sandra is now married with four children and a step-daughter, Carmen is also married and has four children, and lives in Lincolnshire. Maureen remained in Peterborough and has four children. At the time of the second photo, she had broken her right arm so she hid it behind her back. 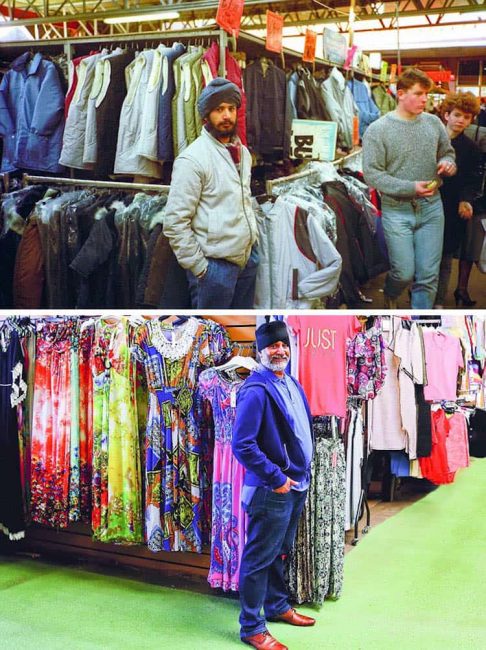 After leaving school, Tasbir Singh worked on a stall at the market for four years. Nowadays, he is married with three children and four grandchildren. 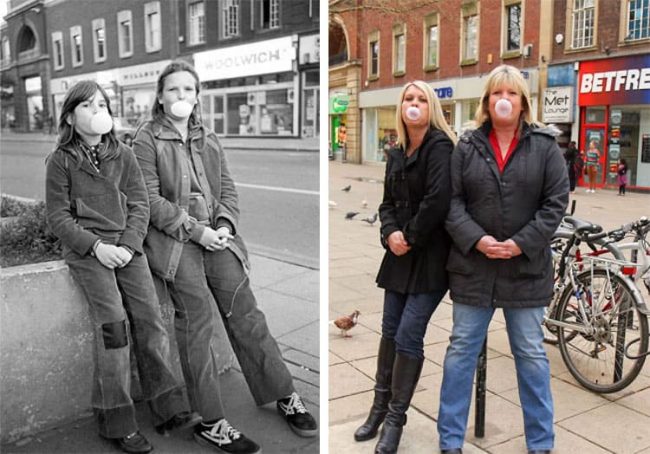 Sisters Anna (left) and Emma Hankins posed while blowing bubbles with Hubba Bubba bubblegum in Bridge Street while waiting for their mother while she was shopping. The sisters are married with families these days, and still, live in Peterborough. Anna now works in a pharmacy and Emma works for the Ideal World shopping channel. 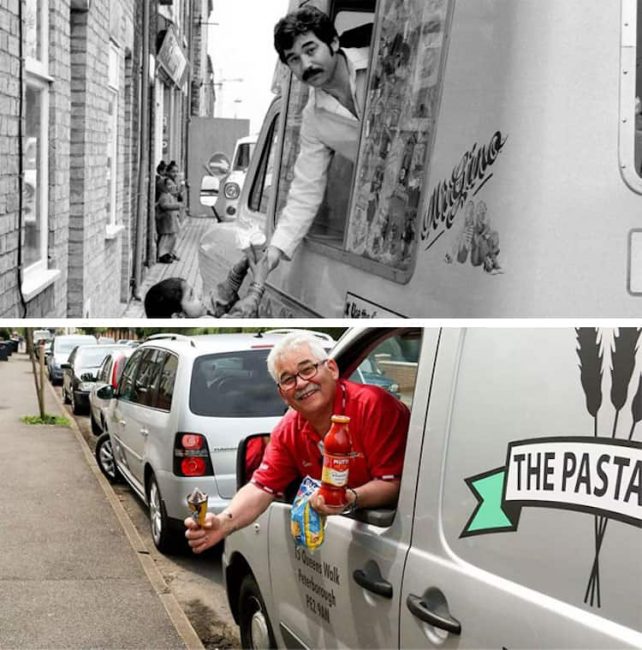 When he came to Peterborough from Italy, Genesio (Gino) Borrillo bought an ice cream van. In 1992, he set up a pasta shop in the city, and he is still running it together with his daughter. He is married and has three children and four grandchildren. 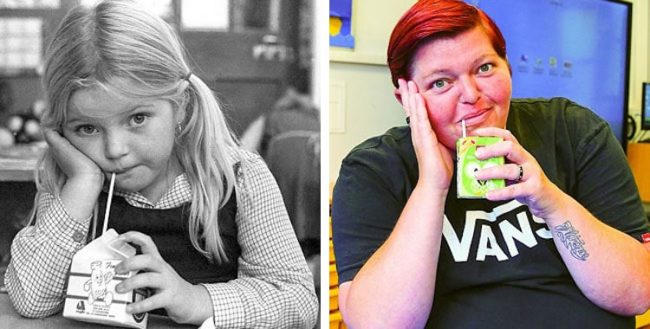 This is Layla Gordon drinking her daily bottle of milk at Queens Drive Infants School. Nowadays, she lives with her long-term partner and two children in Peterborough. 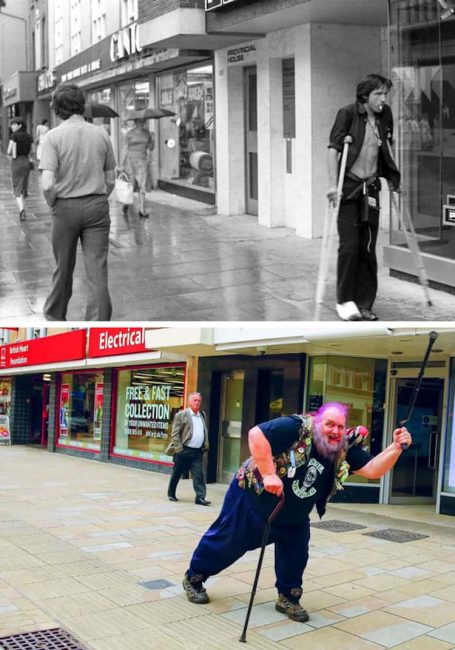 In the ’80s, people knew Steve Osborn as Metal Mickey, due to the plates and bolts he had in both his legs, after having broken them in numerous motorbiking accidents. Nowadays, he uses walking sticks to get around and lives in Spalding, Lincolnshire. He is married and has four children. He plays the guitar with many bands and has raised more than £20,000 for the National Association of Bikers with a Disability. 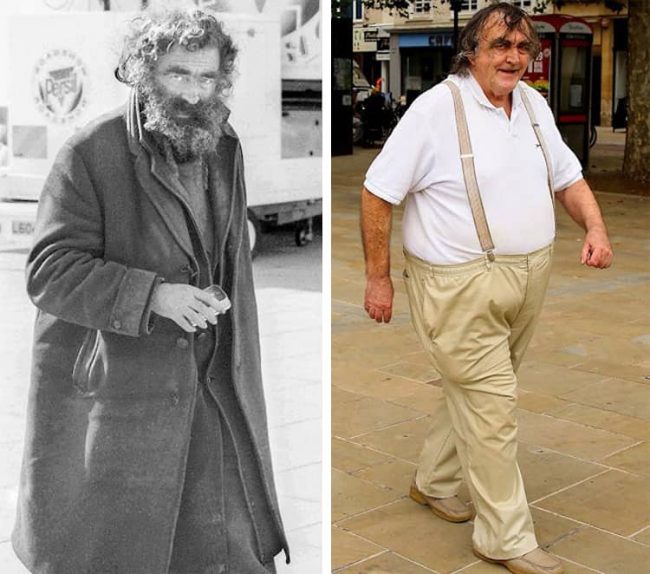 Scotsman Michael Ross, known as Nobby, used to be a headteacher once. Yet, he lived in a bus shelter for 10 years in terrible conditions after his house burned down. 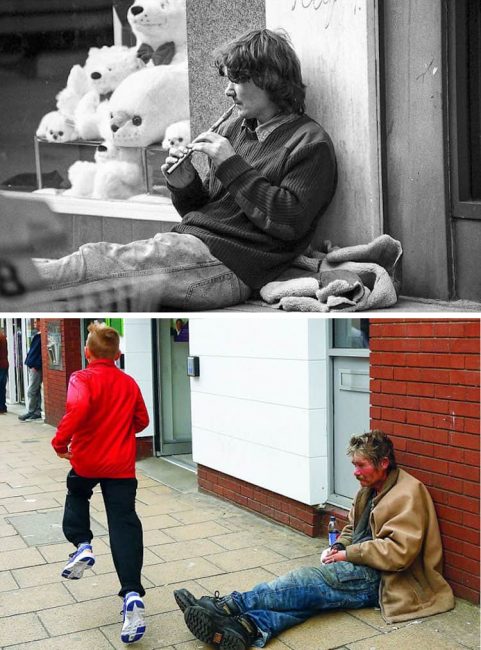 Neil wandered around Peterborough town center, playing the flute outside the Co-op bank in Westgate for years. 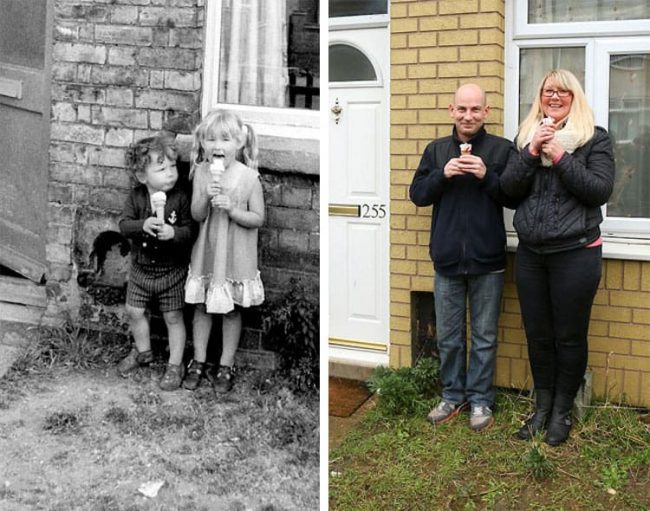 Donna Yarnell, five years old then, and her three-year-old brother Steven are licking ice creams in their front garden. The moved out of the house two years later, so when they returned decades afterward, it brought back numerous memories. They both live in the city, and Donna works in a pub and has four daughters, while Steven has a son. 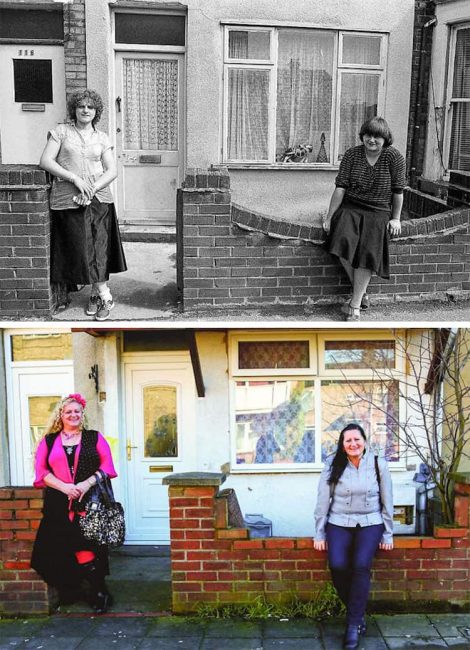 Sisters Maria (left) and Annamarie Plavecz were photographed in Star Road. Nowadays, they both work as carers. 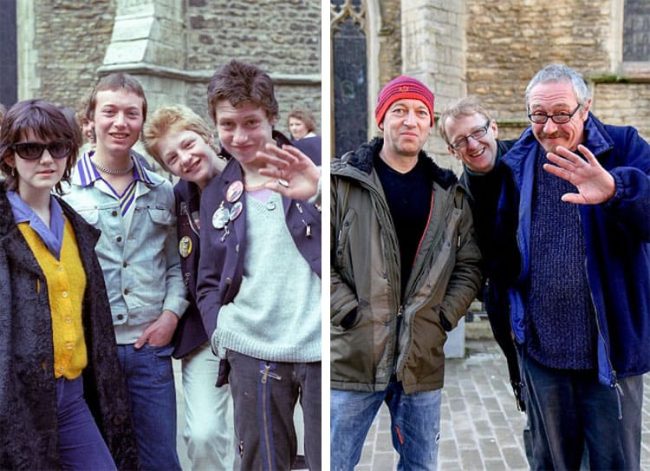 These are John Church, Gary Beckett, Ade Lawrence, and Pippa Hodgson, pictured in Cathedral Square, wearing pin badges. John, who is now a painter and decorator, explained: ‘The other lads were school friends and Pippa was a mutual friend. We used to hang out together and listen to punk music. I think I was about 15 and on the verge of becoming a punk.’ He still plays in a band with Ade, Pippa lives in Spain, while Gary emigrated to Australia. 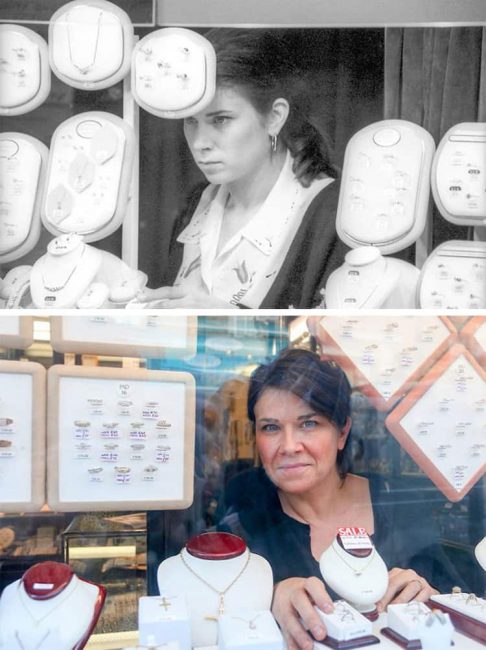 Vicki Gracey then worked as a sales assistant at a jewelry store in Queensgate Shopping Centre, and she now deals with tenancy sustainability. She is married with two children. 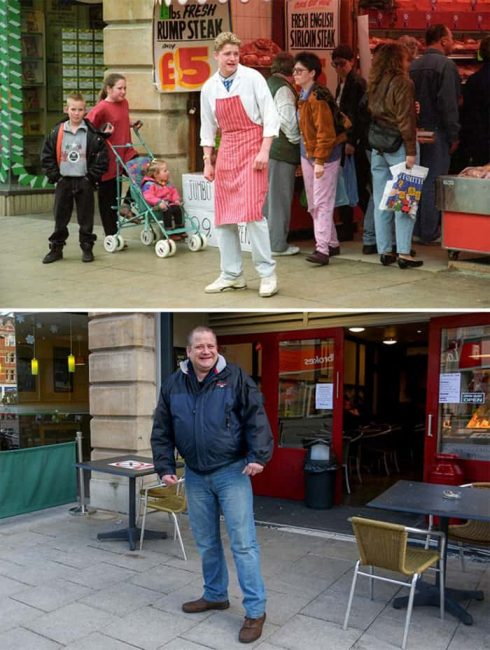 Richard Price, 17, worked at the butcher’s for three years. Nowadays, he is an entertainer and lives in the city. 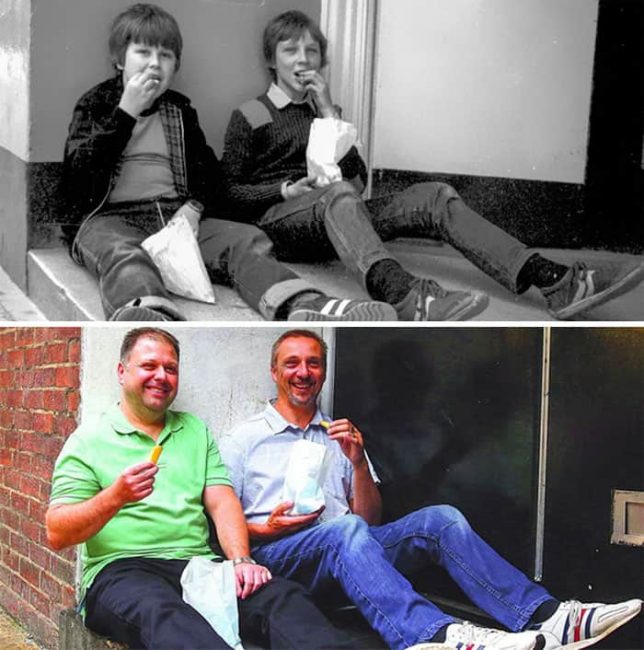