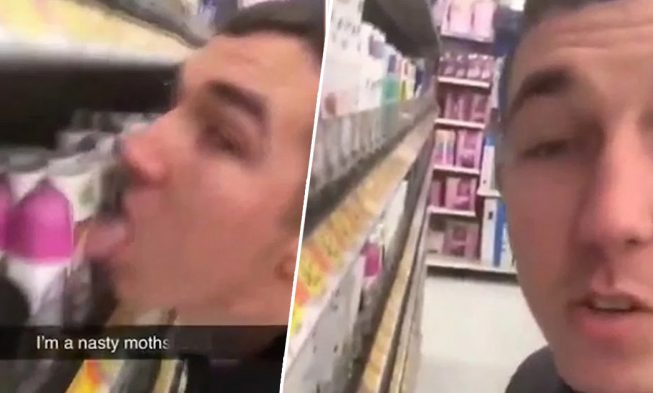 Cody Pfister, a 26-year-old man from Missouri, filmed himself licking shelf of deodorant and uploaded the photo to Snapchat. While he was filming the video, you can hear him saying:

“Who’s afraid of the coronavirus?”

The video was taken on March 11 at Walmart’s Warrenton store and since then, Cody was taken in custody on March 23. He was charged on March 25th and the charge was reported to be a low-level felony.

Since then, the City of Warrenton Police Department released a statement about the arrest:

“A local resident who took a video of themselves licking the merchandise after making a ‘Corona Virus’ [sic] statement at Walmart and posting it to social media has been taken into custody. Charges will be pending through the Warren County Prosecuting Attorney’s Office.

This particular video, which won’t be shared here, has gained some international attention and we have received numerous reports about the video from locals, nearby residents, as well as people from the Netherlands, Ireland, and the United Kingdom.

We take these complaints very seriously and would like to thank all of those who reported the video so the issue could be addressed.”

Everyone around the world was outraged from the clip, even Piers Morgan. He stated that he wants Pfister to be put behind bars and even if he ever got coronavirus himself, he should not get any healthcare.

Morgan added on his statement made on Good Morning Britain:

“This is somebody in America, who went to a supermarket knowing the coronavirus is attacking everyone in the United States, and he did this and posted it online. What I would like to happen to him is I’d like him found, and I am sure they will get him. I would like him put in prison, immediately.

As of March 25, 356 cases have been reported of people infected with the coronavirus in Missouri. As for the deaths, there are only 8 reported cases.

The Centers for Disease Control and Prevention has posted statistics that currently, there are 68,905 cases in the early hours of March 24 in the entire US. The total death statistic is 1037 people as of now.

Even though these figures are very high, President Donald Trump has stated that he wishes to loosen the restrictions made as of now in about three weeks. He added that he hopes people will get together for Easter Sunday and visit their local churches.