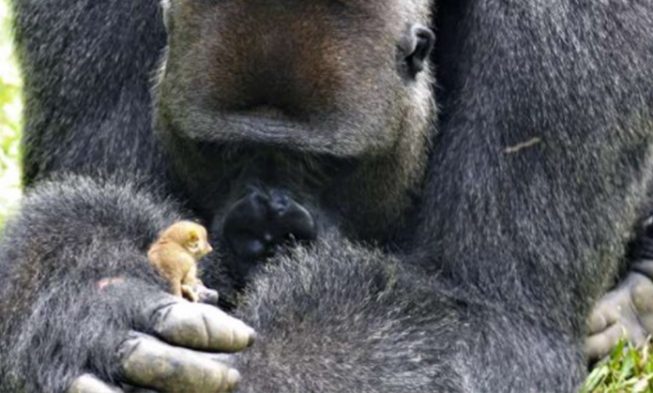 Established in 1996, Ape Action Africa, a non-profit committed to the protection of endangered gorillas, chimpanzees, and monkeys, is always discovering new ways to surprise these seasoned caregivers.

At the Ape Action Africa sanctuary in Cameroon, Bobo, a Western Lowland gorilla weighing about 200kg, is seen carrying the tiny bushbaby, which weighs around 200g, and letting it move around its body.

This is the moment a gorilla is seen playing tenderly with a wild bushbaby that ended up in a sanctuary for rescued animals within its enclosure.

Before deciding to return to Bobo, the bush baby showed no fear of Bobo, jumping around his body and spending time hopping around in an open grassy field.

In 1996, poachers killed Bobo’s parents for meat. That’s when Bobo arrived at the sanctuary. This is sadly quite a common story. He is one of the many primates that came under this animal sanctuary’s security. The people running the site have gotten to know them all fairly well.

That’s why it’s always nice when the employees at the sanctuary witness something like this for the first time. Bobo and an incredibly tiny bushbaby actually becoming friends.

The Galago nocturnal creatures are incomprehensibly tiny in comparison to a gorilla.

This tiny nocturnal creature had probably been living within the enclosure of the gorilla. There are trees just outside the fenceline, because the forest is the field around it.

While taking a few moments here and there to get a good close-up view of the tiny primate, Bobo allowed the bushbaby to climb into his hands and around his body.

Bobo spent almost two hours with the bushbaby. Afterward, he returned it to his enclosure’s collection of trees, and the bushbaby vanished from view.

Ape Action Africa has over 300 primates in its care. They are now one of the largest conservation projects of its kind in Africa. Quite a lot of the animals are there mostly due to the illegal hunting for meat and illegal trading with pets. As a result of the international demand for exotic meat, deforestation, and live animals as pets and zoo exhibits, the dangers to the animals have increased in recent years.

Here is the video of the gorilla and the bushbaby: