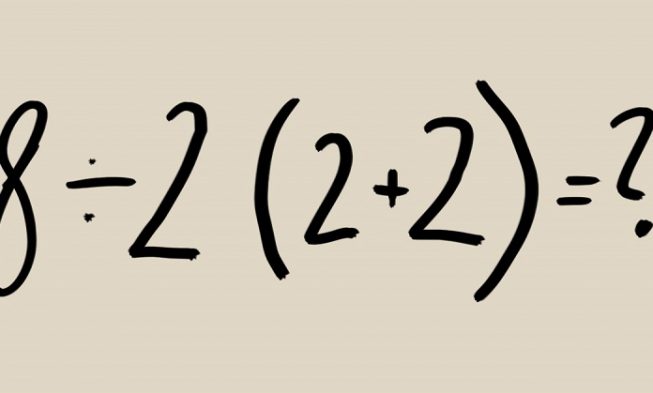 Solving a problem that’s difficult for others is a great satisfaction for most of us. As soon as we find the solution to a problem, it’s normal for us to share it with others and see if they have found the right answer. However, this problem is tricky since it divides the public into believing that there are two answers (one side argues for the one answer and the other side argues for the other).

This problem was shared on Twitter and many people divided themselves into two groups of ‘right answers’. One of the groups claims that the right answer is 16 while the others claim it’s 1. The reason for this division in groups is how these people learned math.

For example, people that learned math using PEMDAS, an acronym showing the order of calculation, claimed that the answer is 16.

For those of you that never learned the PEMDAS acronym, it teaches that the order of calculation is:

With this acronym, you first solve in the parenthesis, giving you a problem of 8÷2(4), which is the same as 8÷2×4. By solving from the left to the right, you solve the division first leaving you with the equation 4×4=16.

However, people that learned the other acronym called BODMAS claim that the answer is 1 instead of 16.

Just like the PEMDAS acronym, BODMAS also shows the order of operation in the following way:

The way the principle of BODMAS is applied gives a result of 1 of this equation because instead of solving from left to right for division and multiplication, BODMAS first removes the operators. So, the first operator that needs to be removed is the B, or brackets, leaving the equation as 8÷2(4) = 8÷8 = 1.

Now, this way of solving would have been true if the problem was written as 8÷(2(2+2)). With BODMAS, people were adding brackets that weren’t even there. Even some calculators solve this equation wrong proving that it’s not just human minds that get confused by this equation.

One math teacher explained that the correct answer is 16 and claimed the people that got an answer 1 used an outdated version of the order of operations. Many people are thought to remove the brackets first so they forget to divide before they multiply. When talking about multiplication and division, it’s important to always move left to right and never right to left. In this instance, the division symbol is at the left side so dividing the 8 with the 2 should come before removing the brackets.