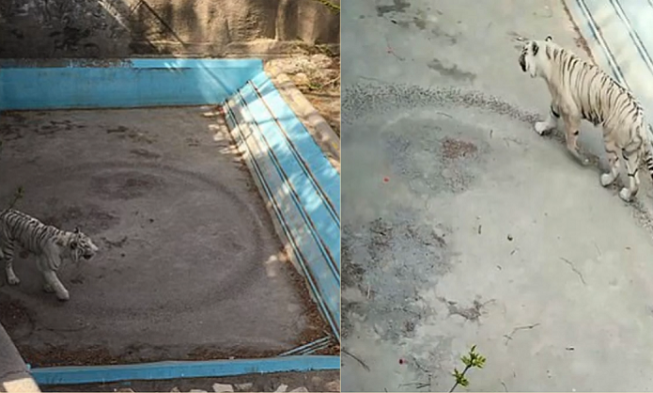 Some recent footage that was taken at a certain zoo in Beijing, one of the largest cities in China, shows a tiger held captive.

The unfortunate news is that the tiger is wandering in his enclosure in endless circles that can visibly be seen on the footage. A staff member told reporters that for animals who have been living at the zoo for a long time, this form of behavior is actually normal.

Animals tend to act in a similar fashion to what they would do or encounter in the wild. And this is by far the most important thing to remember when keeping animals in captivity. They always mimick their natural environment. Sadly, zoos are the worst offenders of breaking this law, and things just don’t improve amid the constant bad press.

Continue to scroll if you want to see the terrifying video…

Horrified web users and animal lovers from China are as we speak raising questions about the captive big cat’s state of health.

One of the people on the platform wrote that there wasn’t enough room for the tiger there and that it was emotionally ill.

Another wrote that the tiger was obviously depressed, which might not be far from the truth.

Animals are purchased, sold, exchanged, and bred in a zoo. On the other hand, those animals that are contained in a sanctuary are there simply because they can not survive in the wild alone.

Zoos have actually played the environment card, claiming in the past that they have fulfilled an environmental function…

But several animal rights groups have consistently shot this statement of theirs down. Zoos can more accurately be defined as ‘collections’ of interesting animals than as actual havens or residences, despite their professed concern for animals.

In a bold declaration about animal captivity, PETA refuted all of their claims about having anything to do with the environment.

#China
a heart-wrenching video has
shown a captive tiger appearing
to be depressed as it walks in
circles non-stop inside a tiny
enclosure at a Chinese zoo.#DontBuyAticket #AnimalRights #OpCloseTheZoo #ZoosAreAbuse pic.twitter.com/9wrA1nVl5M

After animals have lived in a zoo for a long time, this sort of behavior is expected.

One of the head zookeepers said that they took the tiger to get behavioral therapy. They got him more food and toys, so they consider that to be “psychological counseling” for the animal.

What are your thoughts on this?