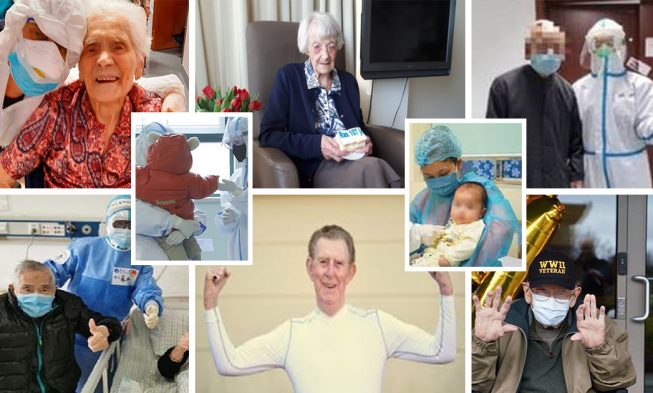 360,000 and more have been confirmed as recovered from the devastating virus COVID-19 right now.

As of now, 1,622,300 cases of infected people have been confirmed throughout the world. Out of all of them, 463,527 cases are closed. From those closed cases, 366,334 are recovered and 97,193 people have passed away from the coronavirus according to the Worldometer website.

The true number of recovered patients should be much higher since many countries are testing their infected patients if they require hospital treatments, which does not include the ones treated at home.

If the patients have no to mild symptoms, they are treated at home with self-isolation. This is why they are not counted among the total recovered or infected.

Due to the high number of recovered patients, China has soothed the lockdown in its epicenter, Wuhan, after 77 days in strict lockdown.

Citizens of Wuhan that have been confirmed as healthy can now leave their house freely. However, China is still implementing temperature checks and home visits from doctors and medics as an effort to ensure there won’t be a second wave of the infection.

Countries in Europe that were struck by the virus are also planning on easing the lockdowns in place. Europe was struck with the worst outbreak of any other region as of now and are slowly but surely reaching the peak.

However, health officials and politicians cannot emphasize enough about being careful about the outbreak. Even though there are fewer hospital admissions, deaths, and newly infected in places like Spain and Italy, the pandemic is not exactly at the end.

If countries are not careful enough and end the lockdowns earlier than they should, it might bring back a second wave of the virus which experts claim that it would be much more devastating than this one.

Andrew Cuomo, the governor of New York, made a statement saying “We are flattening the curve because we are rigorous about social distancing. But it’s not a time to be complacent. It’s not a time to do anything different than we’ve been doing.”

New York yesterday recorded its highest increase in daily deaths with 779 people passing away. The overall death toll in New York is 7,067.

Wuhan, the city where the global pandemic began, lifted its lockdown after 76 days of strict movement restrictions.

The residents of the city are required to use a smartphone application which will show that they are healthy. Additionally, the application will make sure that they haven’t been in any recent contact with people that are confirmed to have the virus.

Even though people are free to leave their homes, schools are still closed in Wuhan. When people enter buildings, they are checked for temperature and wearing masks is strongly recommended.

With USA recording over 470,000 infected and almost 17,000 deaths, the Centers for Disease Control and Prevention considers changing the guidelines of self-isolation. They plan to make it easier for people that were exposed to someone confirmed with the virus to return to work if they have no symptoms.

The proposed guidance which was intended for workers in critical fields should be changed in a way that will allow them to work. The only requirement these people need to make is to take their temperature at least twice a day and continuously wear a mask while they are at work.

US’s top infectious disease expert, Dr. Anthony Fauci, explained that the government in the US is working on plans to reopen the country which will restart the economy, hoping that social-distancing will be enough to stop the spread of the virus.

He made a statement on Fox News that this plan won’t be happening right away, however “it means we need to be prepared to ease into that. And there’s a lot of activity going on,” Fauci stated.

In the US, many different states have experienced escalating numbers of coronavirus infected such as Detroit, Chicago, Colorado, and Pennsylvania. More than half of the deaths due to coronavirus in the US come from The New York metropolitan area which includes lower Connecticut, northern New Jersey, and Long Island.

Giuseppe Conte, the Italian Prime Minister, should be announced in the next few days how much longer the country will remain in lockdown. It’s expected that some restrictions could be eased. The politicians are discussing opening more of the industries in Italy, but we’ll see what they end up doing.

Many proposals are being given to Italy’s government, including issuing immunity certificates. For these certificates, people will need to be tested for antibodies in a blood test. This will allow younger workers to return to the industries first because they are at a lower risk of dying to the virus.

Italy is the country that was hit the hardest by the coronavirus, however, tensions have fallen because they’ve made it through the peak. With over a month of recorded cases, Italy had the most recovered people recorded and the smallest amount of deaths in just one day. Sadly, 18,279 passed away as of now.

Spain recorded 15,447 deaths at this moment. Maria Jesus Montero, the budget minister of Spain, claimed that people in Spain will recover progressively in their normal life starting on April 26. However, he did warn that this de-escalation of the lockdown will result in an orderly step so that they’ll avoid reigniting the virus.

The government in Spain did not express exactly what measures and steps they will implement after relaxing the confinement. However, the claimed that most measures will be given by experts in charge.

Without any specifics given, the French authorities are planning on ending the lockdown period which is set to expire on April 15th. As of right now, the death toll in France reached 12,210.

Mr. Delfraissy is the one leading the scientific council that advises the president of France.

He claimed that before people start to leave their homes regularly, three things are required:

The number of newly infected in the country must slow down; more beds for intensive care need to be freed; to have more tests to check if people have or had been infected and to trace those people. Additionally, he thinks that his countrymen should start wearing masks outside.

Privacy concerns have been brought up by the European Union about the virus-tracking mobile applications. The applications have been made by individual governments which are in charge of developing digital tools to come out of the crisis.

Applications for tracking the virus use smartphone location data so that they’ll monitor the movement of the infected during the quarantine. This technology is breaking the freedom and fundamental rights of those being tracked claimed by the EU.

World economies are driving the fact that the world needs to go back to normal as quickly as possible.

French economy entered a recession after the Bank of France made an announcement. More than 6% drop was recorded in the first quarter compared to the previous three months. Germany, the economic powerhouse of Europe, can also face a deep recession.

The world’s third-largest economy, Japan, could have a 25% decline this quarter. This will be the highest decrease since the tracking of the gross domestic product began in 1955.

The number of infected and deceased is increasing rapidly everyday with numbers changing by the hour. We need to know that even though these numbers give a sort of a statistic about the infected, it’s not always the true number.

Many more people are infected from the virus that is not confirmed because of limited testing, intentional underreporting by governments, and people that carry the virus and don’t have any symptoms.

Stay safe at home if you can and have as little contact with other people as you can. The world is not going to end if you stay a couple of months safe at home. It’s not only yourself that you should worry about, but your family as well.