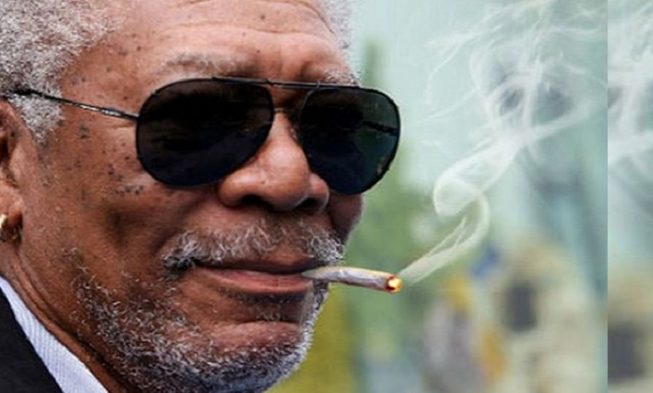 In an interview with The Guardian, Morgan Freeman has said his famous words “Never give up the ganja”, which was the moment that the entire world learned his strong stance on marijuana.

Recently The Daily Beast met with Morgan Freeman for an interview which they were supposed to talk about an upcoming movie, however, the topics went on differently. The conversations were filled mainly with his stance on marijuana. Freeman described his appreciation for weed and how he supports the movement for its legalization. He also talked about his own use of it.

Morgan Freeman was in a car accident seven years ago that nearly killed him, which left him with a fibromyalgia pain on one of his arms.

When he was asked about his stance on marijuana legalization, he responded:

They used to say, ‘You smoke that stuff, boy, you get hooked! My first wife got me into it many years ago. How do I take it? However, it comes! I’ll eat it, drink it, smoke it, snort it! This movement is really a long time coming, and it’s getting legs—longer legs. Now, the thrust is understanding that alcohol has no real medicinal use. Maybe if you have one drink it’ll quiet you down, but two or three and you’re fucked.”

Pausing, he points to the glove-aid coming out from his left sleeve. “Marijuana has many useful uses, I have fibromyalgia pain in this arm, and the only thing that offers any relief is marijuana. They’re talking about kids who have grand mal seizures, and they’ve discovered that marijuana eases that down to where these children can have a life. That right there, to me, says, ‘Legalize it across the board!’”

“And what negative effects does it have? Look at Woodstock 1969. They said, ‘We’re not going to bother them or say anything about smoking marijuana,’ and not one problem or fight. Then look at what happened in ’99,” In 1999, at the Woodstock reunion there were many riots and incidents have happened.