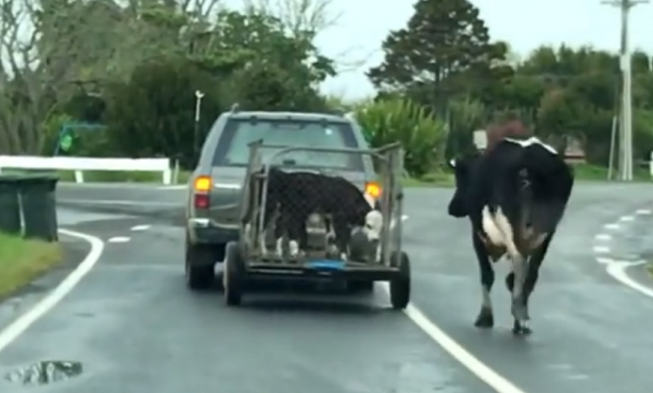 Cows appear to be really similar to humans in terms of building strong maternal bonds with their babies.

Consequently, they’d do anything they can so as to protect them. So judging by the content of this video and the above mentioned information, you may guess how desperate and hopeless this cow must have felt the moment she was separated from her calves.

The New-Zealand-based animal rights group SAFE posted a heartbreaking video which features a desperate saw chasing after her little calves, as they are being driven away in a cage.

There are no further details about the video or the outcome for these animals. The organization published the video after it was sent by a concerned citizen.

This snuggling calf is everything ❤️
[via Luvin Arms Animal Sanctuary] pic.twitter.com/fi0Qztm6Rf

Treatment of cows on dairy farms

Unfortunately, this kind of situations happen pretty often on dairy farms, where caws are impregnated by the farmers, against their will, so that they can produce milk.

But their trauma does not end here. On top of that, their calves are taken away from them just a few days after they were born. Caws are truly exploited by their handlers and as long as they grow old and the farmers see no more use of them, they kill them.

Because of the constant cycles of breeding and lactation, the caw’s body breaks down and it ages way faster than it normally would in the wild. Actually, it’s been noticed that animals on factories grow unnaturally fast, when compared to the way they would grow if they were left alone. In fact, a dairy cow should live for about two decades. But under the above mentioned circumstances the live about five years on average.

The SAFE organization posted an explanation on Facebook, regarding this matter. They said that in New Zealand about 2 million calves are sent to slaughter as wastage just a few days after they were born. It’s really sad that these wonderful and so emotional creatures and mistreated on dairy farms.

Considering the fact that they are so curious, sensitive and able to form close bonds and friendships with the other cows of their herd, it’s really sad that they are exposed to so much suffering. The organization points out that people must understand that cows are really similar to dogs, and humans in general. Therefore, they should be more considerate when it comes to their treatment.