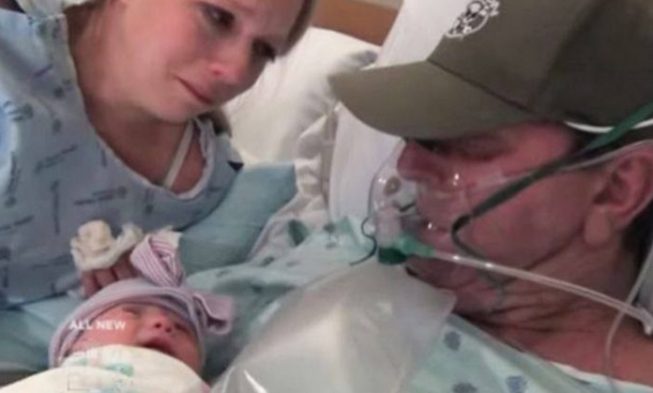 Giving birth is one of the happiest experiences for every family. However, a couple in Texas knew that harder times were coming. It was a heart-wrenching experience for Diane Aulger form The Colony, Texas to prematurely give birth to her fifth child. She wanted do give a chance to her dying husband Mark to see their child before he passed away. Therefore, Diane gave birth to their baby girl two weeks before the initial term.

Last April, Mike Aulger was diagnosed with colon cancer. The 52-year-old man has surgery to remove cancer, but before the removal, doctors gave Augler six months of precautionary chemotherapy. Unfortunately, his lungs were severely damaged by the chemo.

He started having trouble breathing in November and soon after, in January, he was sick enough to be put up in a hospital. The chemotherapy that he received caused pulmonary fibrosis, but his loving family hoped for his recovery.

However, the reality was the opposite of what everyone expected. Diane was preparing to give birth to their fifth child on January 16, soon after they were given the information that Mark was given mere five or six days to live. His condition got worse over that period and there were hardly any chances that he would recover.

Before he died, he had only one wish – to see their baby girl. Therefore, the doctors scheduled Diane to be induced on January 18. She gave birth to a beautiful healthy girl named Savannah and Mark had a chance to hold her for 45 minutes. The following days, he was only able to hold her for 1 or 2 minutes per day, as he was too tired of the medications. On January 21 he fell into a coma and died two days later.

Diane said: “I brought her home the night before he fell into the coma. It was just me and Savannah when he passed away.”

Mark was happy to take care of the couple’s first two children, aged seven and ten, and Diane’s two previous children, aged thirteen and fifteen before he passed away.

How is Pulmonary Fibrosis defined?

It is a lung disease caused by damage or scaring the lungs, therefore, the lunge tissue becomes stiff and thickened. If the condition worsens, it can badly affect the ability to breathe.

Pulmonary fibrosis is irreversible, meaning it cannot be treated fully. Some therapies and medications can lessen the symptom and help patients breathe more efficiently. Therefore, lung transplants might be required for some patients.

Cancer Treatment May Result in Many Consequences.

Any active cell that is evolving and dividing can be affected by chemotherapy. Chemotherapy doesn’t only affect cancer cells – it will attack a healthy cell as well. It can result in health complications on every level.

The side effects of chemotherapy are stomach pain, muscle pain, headaches, and severe pain from nerve damage. Once the treatment is over, many of these side effects will stop, excluding the nerve damage, which can take years to recover from.

The patients will experience different side effects that depend on the type of chemotherapy they are given. Despite the previously enumerated, long-term side effects can occur in some patients. Some types of medication given in the chemotherapy[y can permanently affect the heart, liver, lungs, reproductive system, and the kidneys. Some patients may experience cognitive difficulties, such as trouble concentrating, thinking, and memory loss, months or years after the treatments is over.

The Community is Always There to Support

After Mark’s death, their home was filled with gifts. To support the widowed mother of five, family, friends, and strangers donated clothing, food, cash, and diapers.

One businessman from California was moved by the story and donated enough money for Diane to buy a minivan.

“It does feel nice that there are so many caring people in the world.”

The family strongly aims to keep alive the memory of Mark. Diane plans to put pictures of her beloved husband around their home, as her children are constantly remembering their funny father.

“We’re living day-to-day as if dad’s still here,” said Diane. “We know dad is here with us.”